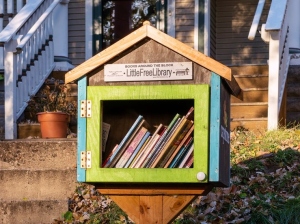 On October 18th, Todd Bol died in Minnesota at the age of 62.  You may not recognize his name, but I’ll bet you’re familiar with something he did.

Mr. Bol was the creator and founder of the Free Little Library, a global public bookcase non-profit organization.

“Little Free Library is a non-profit organization that inspires a love of reading, builds community, and sparks creativity by fostering neighborhood book exchanges around the world.”

You’ve probably seen those Little Free Libraries scattered about.  I pass one each morning on my way to work, about a mile from my office.  According to a recent article in the New York Times, these little libraries can be found in all 50 states and in 88 countries.  There are over 75,000 officially registered Little Free Libraries; pretty amazing for something that started out as:

“[A] homage to his mother, a schoolteacher and lover of books. He built a doll-sized schoolhouse, filled it with his mother’s books and put it out for his neighbors in Hudson, Wis., as a book exchange.”

The little libraries promote neighborliness, as well as the sharing of books.  I’ve seen dozens of the little libraries out and about – from the utilitarian to the imaginatively whimsical.  What I’ve never seen is one that was empty, and that seems like a good sign.

The Little Free Library movement has been awarded by the American Library Association as thought leaders in the library industry, and by the Library of Congress for implementation of best practices in literacy and reading promotion.  I love the fact that something as small as that first little library has grown into something so impactful.

“I really believe in a Little Free Library on every block and a book in every hand. I believe people can fix their neighborhoods, fix their communities, develop systems of sharing, learn from each other, and see that they have a better place on this planet to live.”  ~ Todd Bol

Making a better place on this planet to live?  That sounds like a great goal.

Need more evidence of how books can pull people together?  Check out this article on NPR about how October Books in Southampton, England was able to move to their new location, courtesy of a group of volunteers acting as a human conveyor belt.