Today marks a red letter day for us: not only is our blog celebrating five years of existence, but one of our Ladies is publishing her first book today. Jeanne Oates Estridge started The Demon Always Wins in May 2012 in response to the popular Twilight series.

I got to read an early version of it in the McDaniel course for romance writing during the 2012 school year, but lots of people have seen the book in progress. Jeanne mentions her long-time critique group, as well as a group of writers known as The Cool Kids that she met at the Midwest Writers Workshop, members of a one-day workshop in Indianapolis with Lucrecia Guerrero, several of the Eight Ladies and a handful of beta readers. Whew! It takes a village, doesn’t it?

The book was a finalist in all of the five contests Jeanne entered it in, and won the 2015 Romance Writers of America Golden Heart award in the paranormal romance category with an earlier incarnation called Demons Don’t. The sequel, The Demon’s in the Details, was also a finalist in the 2018 paranormal romance category of the Golden Heart. Another version of The Demon Always Wins won first place in the paranormal/SF/fantasy category of the 2015 Diamonds in the Desert contest under the name of Demon’s Wager.

Having read the latest version, I can tell you the book has evolved from good to great over the years – the words are different, but they stay true to the underlying story. But enough from me. Let’s ask Jeanne a few questions!

8LW: We did the McDaniel course for romance writing together in 2012-2013, instructed by best-selling romance writer Jennifer Crusie. What lesson from the class had the most impact on your final book?

JOE: Acts, Scenes, Beats and Turning Points. When Jenny taught us about those, it was like seeing the sun come up for the first time ever. Big light came on, illuminating the reason why my first five manuscripts never really turned out to be readable books. I think all teachers want to know they changed someone’s life. Jenny Crusie changed my life.

8LW: Support is such an important thing for writers! I believe Dragonflies (your group of 2015 Golden Heart finalists) also provided valuable input. Was there anything in particular that you learned from them?

JOE: Nothing I hadn’t already learned from the Eight Ladies—that journeys are more fun in a company of like-minded people, and that having someone at your back when the chips are down gives you the strength to fight on, (you can link that back to my post on having breast cancer, when they showered me with gift cards for the Zon, if you like). I’ve watched probably twenty of them launch their debut novels and each time a lot of the group jumped in to provide Amazon reviews, Facebook post shares and Twitter likes and retweets. And, as I’ve been working my way through the maze that is self-publishing, another self-publisher, Arlene McFarlane, has acted like a mentor, sharing her own very successful process for launching books into the world.

My 2018 group, the Persisters, have also been wonderful. When Arlene pointed out that I needed to have early reviewers ready to post reviews Day 1, half a dozen of them stepped up to accept eARCs (electronic Advance Reader Copies) and provide those important Day 1 reviews.

8LW: Was there anyone else who taught you a lot while writing this book?

JOE: In March, 2017, I sent it off to a professional editor, Karen Dale Harris, who made some brilliant suggestions for tightening the plot and increasing the sexual tension. They were so extensive it took me a month just to wrap my head around what she was saying, and another couple of months to implement her recommendations. She looked at again in January of this year, for reasons of continuity when she reviewed my updated manuscript before starting to edit The Demon’s in the Details. She came back with a much shorter but still excellent suggestions from that read-thru. I made those changes this spring. Since then, it’s been past a copyeditor and a proofreaders, but no more substantial changes.

8LW: Sheesh, I can never fit these interviews into just three questions! I have one more for you, then I promise I’ll stop. You told me you finished the book probably in April of 2018. That’s about six years! The book comes out today, September 1. It’s been such a long birthing process for you. What will you do with yourself today? Hang over the computer, or ignore the internet for a day or two? 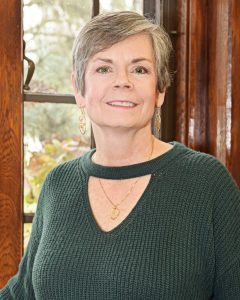 JOE: I’ll do what romance writers always do—work on the next book. I’m planning to release The Demon’s in the Details on January 1, 2019 and I’m shooting for a May release date for The Demon Wore Stilettos. Given all the work that goes into the book after you have a first draft, that means I need to have a draft ready to send to my editor by the end of the year.

Thank you, Jeanne, for your insight into your writing journey! As a special treat, she gave us a favorite snippet from the book. You can find the full book on Amazon here.
(This snippet is from the demon Belial’s viewpoint when our heroine Dara brings him to her demon-fighting grandmother for the first time. Meeting the ‘rents is always challenging!)

“What is your mission?” No glimmer of the compassion Dara had shown the old man down the hall was evident on her face. “Why are you here?”
In that instant, she bore an uncanny resemblance to Joan of Arc. He had badly underestimated her.
He tried to back out of range, but she blocked his way. Her grandmother sprayed him again, this time in the face. It felt as though his flesh was melting from his skull.
“Gaaah,” he shouted, trying to sound as pathetic as possible.
Esther cackled, baring a mouthful of dentures, but Dara frowned. “Are you sure that’s just holy water?”
Esther spritzed some onto the back of her own hand. It beaded up harmlessly.
He groaned. “It may not hurt you, but it hurts me.”
Dara caught her lower lip between her teeth, but Esther said, “He’s a demon. He’ll heal.”
His skin was already regenerating, although it seemed a touch slower than he remembered in the past. Dara watched as though he were a specimen under a microscope. She reached her hand out but snatched it away before she made contact with his face. “That’s fascinating.”
“That’s Satan,” said Esther.

4 thoughts on “Michaeline: Three Questions for Jeanne Oates Estridge about her professional debut!”