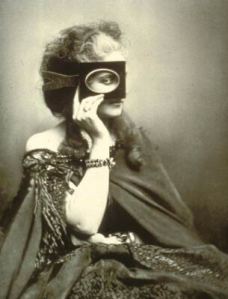 “Oh, I like what I see!” says the female gaze. (Image via Wikimedia Commons)

I think it’s safe to say that most romance readers are OK with the male gaze, as long as it’s not accompanied by more problematic behaviors. Heck, trends come and go, and the “rapey” romance novels of the 1980s were strongly connected to the male gaze, I think. It’s sexy to think you are exciting your lover – there’s a nice empathy loop going on there. And for some people, for a protagonist to be so sexy that her partner loses all fore-brain activities (like decision, discernment and outright good judgement) is a powerful kink. To have a partner who “can’t stop” isn’t any fun in real life, and even the fantasy requires a lot of coordination and mutual consent on spoken and/or unspoken levels. And I say that with a great deal of hesitation, because unspoken consent is so . . . easily misunderstood. As David Bowie sings in “Stay”, “’Cause you can never really tell when somebody wants something you want too.” It’s so much safer (if harder) to use your words.

But male arousal when presented with a lover? Oh, that’s very sexy! It depends on the reader of course, but I enjoy the trope with both straight and gay romances. I love strong people (male/female/other) who become helpless with desire and lose their minds (but not their good sense – in fact, the struggle between “oh, this is NOT the plan!” and “oh, this is the ONE!” is so delicious). Someone makes the first move of consent, the other makes the next move indicating consent, and they fall into a passionate entanglement of kisses and touches.

That’s what I mean by romance readers being OK with the male gaze – and another reason they are often OK with the male gaze is that romance readers and writers are often just as enthusiastic about the female gaze. The female lover looks upon her adored one, and maybe the dear one is classically handsome with a cleft chin and curls, or maybe the dear one is “unconventionally attractive” – or perhaps the darling simply has a very well-shaped earlobe that DRIVES OUR GIRL WILD!

I do think for most women, beauty is not enough. I felt a little uneasy during the Ghostbusters reboot when the male secretary was objectified. I mean, if he’d had some other power, such as smarts, I wouldn’t have minded. But he was the flipside of the dumb lady secretary in so many skits. He was handsome, and he could be stubborn (which may have saved me from outright disgust), but that was about it.

But pair that male beauty with something else, and you’ve got a powerfully attractive hero (and I don’t see why it wouldn’t work in a lesbian romance, as well).

That’s where Trevor Noah comes in. He’d make a wonderful template for a romance novel. He’s funny, and he’s so intelligent. He’s had a rough childhood, so if the romance writer with an up-to-date artistic license wanted to portray him as a little broody in his private life, she’d have a basis for building that character. (-: And he’s a very naughty boy. His autobiography talks about some of his teen adventures, and I think it’s easy to see that he still likes taking a long stick and thoroughly stirring a hornet’s nest or two. Naughty though he is (and some readers really like a bad boy), he is so empathetic and understanding. I’ve seen a lot of him on DVDs and on YouTube, and I’ve rarely seen him make a mean joke. I’ve seen him make true jokes that are so pointed they drive right through the heart of the matter, but there’s not a lot of mean material there.

Apparently, I’m not the only one. Just take a little scroll through the YouTube comment section of The Daily Show snippets. You’ll often see a mention of his dimples driving someone wild. And it’s quite common when he has female guests for someone to start a fantasy romance for him in the comment section (sometimes complete with children and household pets). So much ‘shipping going on.

I think it’s important that female gaze follows some of the same rules that male gaze follows: no losing your mind and pushing yourself on the object of affection; make sure the beloved has other redeeming qualities to intensify the effect; and the mutual consent must be clear if you expect to make this a romantic scene to further the romance arc. Of course, if you are NOT writing a romance scene, the female gaze has as many comedic possibilities as the male gaze – opportunities to embarrass your character, and catapult them on a new path. Perhaps it’s safe to say that in romance, we’re not really talking about male gaze or female gaze, but simply a lover’s gaze.

How about you guys? Can you think of a fictional instance of female gaze that made you feel ecstatic? Or better yet, have you written something delicious from the viewpoint of one of your female characters?

2 thoughts on “Michaeline: Trevor Noah and the Female Gaze”