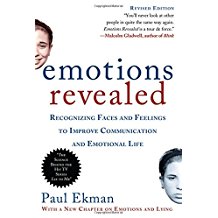 I’ve always figured the trait a writer needs the most in order to craft compelling, believable characters is empathy.

Dictionary.com defines empathy as “the psychological identification with or vicarious experiencing of the feelings, thoughts, or attitudes of another.”

We’ve all known highly empathetic people in our lives, people who seem to have a knack for reading other people’s faces/body language/tone of voice and knowing what those people are feeling without having to be told.

I’ve never been one of them.

I remember once telling a manager, when she was scolding, that is, counseling me for my failure to pick up on someone else’s emotions, that if God had meant us to know what other people were thinking, He’d have installed theater marquees on our foreheads–running signs that announced what was going on inside.

This may (and probably does) seem strange to you, but not all of us are equipped with the same natural ability to read others. How good are you at it?

Take this test to find out:

After I started sharing my writing with critique partners, I got feedback that there wasn’t enough emotion in my work. It became imperative to get better at this business of understanding what emotion looks like from the outside, and I think I have.

One book that was really helpful was Emotions Revealed, by Paul Ekhman. The book is full of photographs of various emotions (It’s worth buying the book just to see the amazing photograph of surprise—two men’s shocked faces as a young woman falls past their fifth floor balcony. She lived, by the way.) The books also details the various components of expressions and talks about micro-expressions and also how people fake various emotions.

So, how did you do on the test? I’ll share my own score in the comments below.

14 thoughts on “Jeanne: Your Empathy Quotient”