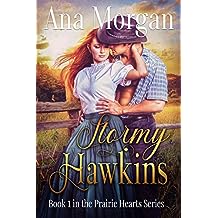 Ana and I bonded over our mutual love of Anne of Green Gables and the commonality that we both relocated to Minnesota from points south. I’ve long since moved back to my home state of Ohio, but Ana adapted to rural life and stayed. She says she’s rewarded every time she looks out her log cabin window and sees only squirrels and trees—and when  her daughter comes home from Brooklyn with friends, clamoring for a home-grown meal.

Q1: Your debut novel, Stormy Hawkins, the first of your Prairie Hearts series, is set in the Dakota Territory, in 1887.  What is it about that time and place that interests you?

I live on an organic farm in west central Minnesota, so eastern South Dakota is “in the neighborhood.” When we moved here, I was a city girl. I had to learn to milk cows, gather eggs, grow a garden, can produce—all sorts of homesteading skills that the locals took for granted. When I set out to write Stormy Hawkins, I embraced the advice that it’s smart to write about what you know.

Q2: You published your first novel with Soul Mate Publishing. What made you choose to go traditional, and what can you tell us about your experiences with this publisher?

After several rejections, I was gearing up to self-publish. Then Stormy Hawkins finaled in two contests. Two editors requested fulls. I submitted to both. Soul Mate Publishing offered a contract first.

My experience has been wonderful. My editor was smart, thorough, and responsive. The cover artist “nailed” my cover. Every deadline set by the publisher has been honored to the day. I’ve been invited to write two more books in the series. I’m writing book two now.

Q3: I read on your website that you relocated from a southern California city to rural Minnesota. I also relocated to Minnesota, but to the Twin Cities, from Cincinnati, years ago. That was a big adjustment. Tell us about your experience. What was the biggest culture shock?

I think the rural-ness was the biggest shock. We settled three hours northwest of the Twin Cities in January, 1972. I was worried that I wouldn’t be able to buy essentials like tampons and bananas.

Things were not as bad as I anticipated. The one grocery store in town was open seven days a week.

The hardware store had blank ‘counter checks’ that you signed and wrote your bank account number in the memo line. The residents of another nearby town spoke primarily Finnish. A farmer’s wife showed us how to hand milk the Jersey cow we bought at the sale barn. Though I cringed when I saw pickups parked next to fish houses on the frozen lakes, I quickly embraced the local mantra: Always be ready to help, but don’t interfere until help is needed.

When she was small, Ana Morgan’s dream was to know something about everything. She has studiously waitressed, driven a school bus, run craft service on indie film sets, wandered through European castles, wired a house, married a Marine, canned vegetables, and studied the stars. She knows how to change a flat tire but prefers gallant, handsome strangers who strip off their jackets and spin the lug nuts for her.

Ana embarked on her writing career by crafting succinct cooking directions for her Secret Garden soup mixes—and graduated to lyrical essays about living on a small organic farm for her CSA’s weekly newsletter. Eventually she realized she wanted to write what she loved to read—sensual romance novels.