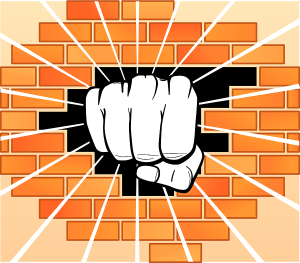 I’d been progressing well on the WIP, galloping along at what for me is top speed, until this week, when I hit a wall. I’d written through my first act and was heading into the second, otherwise known as the Middle. And in my case, although barely begun, the Sagging Middle.

I queried my critique partners, who are only too familiar with the problems of Phoebe and her errant friends and fiancé. What to do? I asked. Within minutes, I got a reply.

Ah, yes. What was my story question?

It’s not good if you don’t know your story question. A person can go down a lot of rabbit holes if she doesn’t know what she wants to say.

Refreshing oneself on story basics is always a good idea, and it seems especially fitting at the beginning of a new year that we (meaning “I”) pause to regroup before we (that would be “I” again) head into the abyss of the middle part of the story. I thought about Phoebe, my protagonist: who she is, what she wants, and what could derail her relationship with the man of her dreams.

How to frame those abstracts into chapters? How to get those aspirations on the page?

I turned to Chuck Wendig, a kick-ass sort of guy, whose blog posts we read as part of our coursework for the McDaniel program. He’s got a post for every problem. In “A Simple Solution for When Your Story Hits the Wall,” he says to look to your characters.

…[I]f you don’t know where to go, look to the characters. Ask them. If they cannot tell you, then you have not adequately given them enough to do. Look to their motivations. Look to their problems. [Emphasis mine] Go back through the work, strengthen these emotional seawalls. Give them things to do. Give them somewhere to go. (Then make it hard for it to do them….)

That advice is simple, but it makes perfect sense. I’ve got an emotional seawall for Phoebe: Chase’s wealth. Phoebe, who was raised poor, is unsettled by Chase’s money. She refuses to let him pay off her school loans, a debt that she feels honor-bound to repay from her own earnings. She’s freaked out by the big, new houses he likes. She doesn’t understand why there’s no budget for towels and curtains.

What are the things couples argue about the most? Patrica asked. Money and kids.

I’m going with money. It sounds a little thin right now—getting movement, much less action, out of that might be hard—but Phoebe has a fierce motivation to lift herself out of poverty and not to lean on a man to do it. (She will not be her mother.) I think I can make this work.

And if not, well, I can always reread Chuck’s “Ten Quick Story Tips To Use Or Discard At Your Leisure.” There’s more than one ladder out of the abyss, and I’ll use them all if I have to. As Chuck says:

I am the Commander of these words.
I am the Queen [sic] of this story.
I am the God of this place.
I am a writer, and I will finish the shit that I started.

6 thoughts on “Kay: Hitting a Wall”