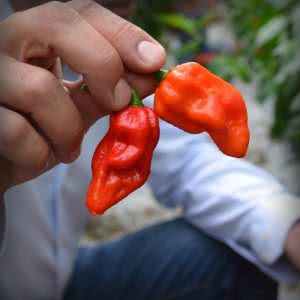 It’s been a while, but now that summer is coming to a close and I’m back from vacation, it’s time to get back to my monthly short stories.

The initial kernel of this story was an actual incident from my past.  That, coupled with an article I read not long ago about the Capital Vices, percolated along for a few days and the story below is the result.

I leave it as an exercise for the reader to decide what the past inciting incident was.

Madeline Cooper looked around the table in the banquet area of Lucifer’s Landing at the sea of arrogant, vain, greedy suits and couldn’t wait for the results of her carefully laid plans to unfold.  She savored a bite of her lemon tart, the tangy sweetness a nice contrast to the slightly bitter taste of her cappuccino, then stabbed her fork into the hand that persisted in groping her thigh under the table.

“Next time I’ll use the knife,” she murmured to Mr Lucent, owner of the aforementioned hand, as she dropped both it and the fork back into his own lap.  He glowered at her then, his wits scrambled by the vast quantity of alcohol he’d consumed during dinner, apparently decided she was just flirting with him and flashed a lecherous smile instead.

“Tonight’s going to be your lucky night, little lady,” he said with a wink.

You have no idea, she thought.

Who else but the partners at Nickerson, Lucent, & Beal, referred to the Bastards of Vice would host their annual office party at the Devil’s Playground Resort, known for excess, indulgence, and an “anything goes” atmosphere that didn’t just straddle the line between right and wrong, it blew right past it in a cloud of dust.

The partners didn’t care.  They considered themselves to be both better than everyone else and above the law.  They were only concerned with their own desires.  The other members of the office staff had only been included in tonight’s event so it could be written off later as a business expense.  They had no idea just how expensive the night was going to be.

They probably should have paid a bit more attention to the planning of the event, rather than demanding Madeline take care of everything as she had the last year, as if she was a party planner rather than a bar certified attorney.

Well, they were in for a few surprises.

It was going to be a pleasure to watch them crash and burn.

Today marked Madeline’s 2 year anniversary with the firm, making her a legend in the legal world.  Most new lawyers were lucky to make it past 2 months at NLB, let alone two years, but Madeline had.  She’d been patronized and berated, pinched and squeezed, given the most appalling tasks and impossible deadlines, and never heard merest whisper of thanks or praise.

The partners took the pursuit of vice very seriously and bullied or rolled right over those who got in their way.  In the office, it was as if they considered the annual mandatory “Harassment in the Workplace” training as a “How To” workshop.

A less stubborn or short-sighted individual would have quit or sued the bastards for harassment, but Madeline had bigger plans.  Her tenure at the firm meant that she now had her pick of companies to work for.  Companies that spent the last few months searching her out, wining and dining her, and offering her salaries and benefit packages that others could only dream of.

Once she’d signed the official job offer last week from the firm she selected, which included a partnership after one year if she met certain conditions, all she had left to do was to wrap up her remaining open cases and decide an appropriate farewell for the NLB partners.

Her boyfriend Zeke – muscled, loyal, and with incredible stamina – had offered to beat them all up, but the situation wanted brains, not brawn.  Fortunately, Madeline had brains in spades.

She made her plans carefully and then sat back to watch the results.

One thing she’d made certain was that tonight’s banquet room had a working surveillance system and that signs were clearly posted informing the patrons that by attending the event, they were giving their permission to be filmed.

She also made sure the venue manager engaged the services of a lawyer experienced in harassment cases and prepared some preliminary paperwork; just in case, of course.

Dinner progressed without a hitch.  The food and liquor flowed freely, with none of the partners exercising anything remotely like moderation.  The more they drank the more their true natures revealed themselves.  They groped the servers, made wildly inappropriate comments, and generally made nuisances of themselves, totally disregarding anyone else around them.

The junior staffers, at their own table off to the side, watched the events of the evening unfold as if it was live theater.

The bickering between the Nickerson brothers began around 10:00.  It started with Vince Nickerson boasting , once again, about how many cases he had won and gloating about how he “stole that Anderson case right out of your hands.”

Sal Nickerson, who hated his brother Vince with a white-hot passion and had been sabotaging his cases for years, responded with mocking laughter adding, “I let you have that case.  It was such a slam dunk, I figured even you couldn’t screw it up.”

Things degenerated from there.  Normally Madeline would play the role of peacemaker, if only to maintain the reputation of the firm, but not tonight.  Tonight she sat back and let them be themselves.  It was barely 10:10 when the two came to blows and about 10:25 when the police arrived and escorted them in handcuffs and still raging, off the premises, leaving upended tables, broken chairs, and a little blood behind.

Madeline glanced over at the company photographer, soon to be leaving the company for freelance work, and hoped he was getting some good shots of the events of the evening.  If he had, they’d be worth their weight in gold.  Not that she’d ever condone blackmail of course, but photographic proof of the fall of Nickerson, Lucent, & Beal was bound to be of great interest to a number of folks.

It was just a few minutes later amidst the remaining confusion when Mr Lucent rose unsteadily from his chair.  He gave Madeline’s shoulder a squeeze, whispered, “Don’t worry sweetheart, I’ll be back for you shortly,” then staggered out the door for an assignation he’d arranged with one of the “hostesses.”

About 15 minutes later the sound of an ambulance could just barely be heard over the din in the banquet room.   One could only guess that Mr Lucent was no longer feeling remotely amorous, having come in contact with a habanero oil laced condom (those folks at the corner pharmacy had some interesting skills).  While tonight’s incident was unlikely to cure his lecherous ways, at least it should slow him down a bit.

That’s three down and . . . right on cue, Mr Beal clutched his chest and toppled out of his chair, done in by a combination of too much liquor, overly rich food, and a pre-existing condition or two.  He was most likely just suffering from indigestion, though a heart-attack wasn’t outside the realm of possibility.  He had, after all, made it a point to order the biggest steak on the menu – 48 ounces – after one of the Nickersons dared him to.

Fortunately, the Devil’s Playground, used to the excesses of their guests, had doctors on staff.  One rushed over, an ambulance was called, and in short order, Mr Beal, still breathing though in extreme discomfort, was whisked off to the local hospital.  If he was lucky, he could share a room with Mr Lucent.  No doubt they’d find something to talk about.

With the removal of Nickerson brothers, Mr. Lucent, and Mr Beal, only Mr Nickerson the Elder, the founder of the company, and Mr. Smythe, too drunk and lazy to have ever made partner, were left at the head table.  Mr Nickerson was pocketing his credit card, having just signed the charge slip the server brought over, while two busboys began to clear the table.

It was just about then that the manager, along with a very official looking individual, approached Mr Nickerson and handed him some very legal looking papers.  There were some tense, low-voiced words exchanged and then Mr Nickerson and Mr Smythe were escorted out of the room by two very big, very strong looking bouncers.

If Madeline was a betting woman, she’d say they were going to need a good lawyer, experienced in handling harassment cases in the near future.  Good luck on that; they were going to be up against the best – her new firm.  A pity she couldn’t prosecute them herself, but the case would ensure she made partner nonetheless.

With the evening at a close, Madeline shrugged on her coat and picked up her purse as the remaining members of the company filed out of the room.

As her last act as an employee of Nickerson, Lucent, & Beal, Madeline glanced at the credit card charge slip that Mr Nickerson had signed, looked at the tip, and then added an extra “0”.  With all of his other problems he’d never notice the difference.

Besides, those servers had earned every penny.