I’m writing this post a little early, because Kay is visiting us here in London. World news is getting scarier at home and abroad, the weather has turned chilly, and our neighbors (on both sides) are engaged in noisy construction work, but we’re making the most.

So far we’ve enjoyed food, drink, a LOT of book talk and a tour around Highgate Cemetery. The sun shone, which was a bonus, even if it didn’t do much for the brooding, gothic atmosphere.

Kay wrote in her Thursday post: I think travel is good for people. It puts you in different and sometimes complex situations that challenge you to see events, places, and people in new ways. It can stimulate your thinking and creativity. And it’s fun.

I think it’s also good to have guests. It prompts you to go to new places and do different things. Plus, you get to experience the familiar through the eyes of a visitor, and it’s surprising how different their perspective can be. All of this is a great way to boost creativity plus, as Kay says, it’s fun.

Last night we went to see Much Ado About Nothing at Shakespeare’s Globe. The theatre is in Southwark, on the south bank of the Thames, just a few hundred yards from the site of the original Globe Theatre. The building is a replica of an Elizabethan playhouse, the result of almost fifty years of fundraising, campaigning and research initiated by Sam Wanamaker, the American actor, director and producer. It’s as faithful a reproduction of the original Globe theatre as is possible, built of oak lathes and staves and white lime wash. It was constructed using traditional methods and even has a thatched roof—the only one allowed anywhere in the city of London. The only concessions to modernity are provisions for emergency signage and fire protection. 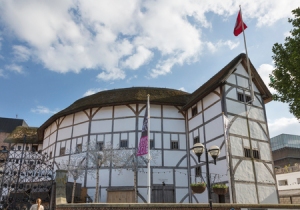 It’s an amazing venue, and I’m embarrassed to say last night was my first visit. Kay and I made a few concessions to 21st century living—we did not join the ‘Groundlings’—the intrepid souls who stood for three hours in the rain in the open space in front of the stage. We were seated, under cover, with rented cushions to soften the benches and blankets to keep us warm (Kay says it was 90 degrees when she left California so the blanket was a welcome addition). Still, it was amazing to experience theatre the way people would have done in Shakespeare’s time.

The production is part of the Globe’s Summer of Love season. What better pick-me-up could there be than a comedy with an ‘anyone but you’ hero and heroine, oodles of witty banter, evil machinations, tragic misunderstandings, and a happy ending? Unlike some Shakespeare, I think Much Ado lends itself to interesting settings—I love Joss Whedon’s Mafia-set movie version—and last night the director chose to stage the play in Revolutionary Mexico in a fusion of Latin music, desert flowers and revolutionary politics. The production blended the original Shakespeare, lots of fabulous music, singing and dancing, and a few modern interjections, nicely judged with no cheap shots. The audience was enthralled, and there were a couple of nice back-and-forth moments of banter between players and Groundlings. It was a wonderful, sparkling treat for a chilly and potentially downbeat day.

So thanks to Kay, in one evening I got to travel more than four hundred years back in time, and over five thousand miles to sunny Mexico. Then we spent a couple of hours talking about it afterwards.

According to George Herbert, an English metaphysical poet, clergyman and contemporary of Shakespeare, living well is the best revenge. I think it’s also a great way to respond to our present challenging environment.

Kay and I have more adventures planned, and I’m betting that by the end of her visit I’ll be refreshed, inspired and ready for my final push on Alexis’s WIP.

What new and exciting travels could you take without leaving home? Why not give yourself a boost and try them now, instead of saving them to show a visitor?

3 thoughts on “Jilly: Travels With Kay”