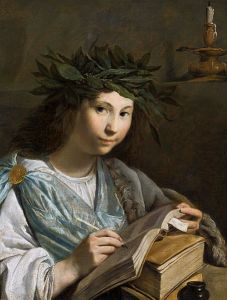 A story has to go through a lot of revisions before it’s the story you want. Way back when I didn’t keep accurate records about such things, I started a novel about a paranormal plumber, and the first two paragraphs went like this:

Mrs. Copra had sounded very worried when she called about her stopped up toilet, and Jennifer knew, as soon as she stepped into the noxious miasma in the foyer, that it was going to be a tough job. She checked her toolbelt, flipped the switch to warm up the cryo-zapper on her back, and felt in her bandolier to make sure the tranquilizer darts were ready and waiting. She could feel the tension, like stage-fright, building up, so she glanced back out the door at the truck to read her slogan. “We don’t save the world, but we make it a happier place.” She looked over at her partner, Tilly, and nodded. “Let’s go make some happy!”

Tilly’s tense face suddenly relaxed into a zen-like calm. “Aaarrrgh,” she growled like a pirate. “Let’s go happy that motherfucker.”

This gave me, the writer, a lot of information about the story that was supposed to come. My heroine was going to be a kick-ass plumber who knew her business and was a total Ghostbuster type. She was going to have a female buddy, and this was going to be a lot of action and some fun. But I didn’t really know what the conflict was going to be, and the first sentence was awful. Still, as beginnings go, it was promising and fun, so I went on to write my first NaNo about my paranormal plumber.

In 2010, Jennifer became Perz, and Tilly became Perz’s sister, Demi, and the new beginning looked something like this:

Perz checked her sister’s ectoplasmic roto-rooter one last time before they headed up the walk to the white McMansion, glowing in the warm autumn night. “Ready?” she asked. “Ready,” Demi replied, and Perz rang the doorbell.

The doors swung open onto bedlam. Through the dark house, she could see tiki torches through broken patio doors, and people ran wildly around the moonlit pool, fleeing short, hunched dark figures. Before she could fully register the scene, a woman with wild red hair and a very expensive bikini supporting her well-maintained body screeched, “Where have you been? I called 20 minutes ago!”

Perz brushed past her and went to the patio doors to assess the scene.

“These monsters have been *rampaging* for half an hour, *terrorizing* my guests, and *ruining* my last pool party of the season!” Mrs. Evans was the sort of woman who spoke in visible italics.

Perz tried to step over the threshold to the patio, but found her foot would not go over the door track.

Demi was the people-person of the pair, so Perz delegated the handling of Mrs. Evans to her with a raise of an eyebrow, and turned back to inspect the mysteriously resistant door. She could hear Demi’s calm voice begin to elicit details behind her.

Now the story starts in a better place: Perz is front and center. The time and to some extent the place are set. The reader gets a huge clue about the genre in the fifth and sixth words: ectoplasmic roto-rooter. My antagonist is better fleshed out (ha-ha!), but then the story starts to get out of my control with the rampaging monsters out on the patio. I can’t get the fine details of the setting, and so I switch the boring details onto poor Demi – I want to follow Perz and kick some ass! Unfortunately, I stick with Demi for several more paragraphs as they figure out what’s going on, and treat an injury, and then finally get around to tackling the patio. But that’s OK. That’s a second draft for you. I need to know all this stuff, and I don’t really know it until I’ve imagined it and recorded it in words.

I’ve gone through about two dozen versions of the opening scenes of this novel. For a time, I was convinced it might be Hadiz’s (the love antagonist’s) story (kind of like in Lord of Scoundrels, where Dain is the one completing arcs and learning to be a human being again). That looked like this:

It is a foul night that begins with a summons from the Goblin King in the middle of the afternoon, the djinn Hadiz thought. The throne room was dark, but he could feel a draft. The breeze didn’t smell like the comforting, earthy smell of the Underground. It carried the curious odor of Above. Not a bad smell, just a smell that didn’t belong here, in Hadiz’s territory.

“You have come at last, Vizier.” The creaky voice of the old goblin echoed against the cave walls.
Hadiz scowled into the darkness. “For peat’s sake, let’s have some light in here.” He heard the soggy flip-flap of goblin courtiers racing around the cave to light the torches. He hated the smoky, stuttery flames; they reminded him of old djinn on their death beds.  One day he’d run real electric lights through the caves, just like the humans did in theirs.

But for now, it was fire or it was magic. And no one had enough magic to light up a large cavern like the Goblin King’s throne room for very long.

One by one, the torches illuminated the cave. The giant columns that framed the king’s throne were still standing. The limestone popcorn on the ceiling caught the light and glowed in half circles over the sconces, the reddish-brown walls were ribbed with rivers of a thousand years of water flowing and evaporating, and then Hadiz saw it. A gaping hole in the wall, about the size of two goblin feet. Hadiz walked over and leaned through the hole. The other side was dark, but for a minute he Lit the chamber on the other side. Rubble, and the curiously smooth walls that marked human invasion. He saw two backhoes, one on its side, and leaving a wake of clear floor from the hole to the machine.

Ugh. Very slow and full of setting like a very traditional fantasy novel. It’s full of set-up and hints about the magic, but nothing is going on! Infodump 101. Even I’m skimming part, and I wrote it. Burn it! Burn it to the ground!

George Diaz had the biggest and the newest house on the hill, as befitted the biggest real estate developer in Evanston, and Perz Jones wanted to think it was a monstrosity. But, the graceful home had charm and elegance and it looked great. Never mind the farmland that had been razed to build it, never mind that it had far too many windows for a Kansas summer, and never mind the stupidest storm water system in three states. Summer was over, and the house shone in the late, late afternoon sun like a beacon on the hill, full of all the promises of wealth and taste.

Perz’s cell phone rang, and she handed it over for her sister Demi to answer while she kept steering the plumbing van up the hill, passing lesser examples of fat cat architecture. She could hear George squawking over the line.

“Why aren’t you gals here yet? Biggest deal of my life, and those investors from Kansas City are going to be arriving any minute. The last thing I need is for the pool toilets to be exploding with someone in them.”

Perz spied George, standing at the end of his driveway in a white linen shirt and navy chinos, yelling into his cellphone. She turned into the drive and he walked beside the van, still ranting. Demi rolled down the window.

“Get your stuff, and come out to the pool then. I thought the pool boy was nuts when he said he saw a face in the john last week, but goddamn . . . .”

Perz slid out of the van and slammed the sliding back door open. Tool belt, yes. Snake, yes. Holy water? Couldn’t hurt. Chalk for drawing symbols, definitely. Pistol? No, probably not this time. She’d be awfully tempted to shoot George, she was afraid.

George was still nattering away. “This evil, awful face was leering out of the pool hatch . . . .”

Perz snorted. “It was probably a raccoon, George.”

George’s face went a frightening shade of red. “If it was a goddamn raccoon, I would have called Reggie out in New Arcadia, not some newbie outfit that bills itself ‘Jones Sisters Paranormal Plumbing.’ Y’all supposed to deal with weird shit. Well, this is some pretty weird shit.” He stomped through the front doors, and the sisters trailed after him through the living room. “Goddamn raccoon,” he muttered. “I would have blasted it with the rifle myself if it had been a goddamn raccoon.” He threw open the patio doors, and marched around the pool to the grotto on the other side.

Men in white dinner jackets looked up from the catering tables, then went back to folding napkins and arranging sushi on plates. The grotto was a striking water feature of granite, complete with a diving board between twin falls. Tasteful, thirsty bushes softened the artificial cliff. George shoved away a boulder.

Expectations are a huge block. Maybe this isn’t meant to be a novel – maybe it’s meant to be a series of short stories or novellas. And maybe I’m trying to cram too many characters into very limited real estate. But it’s still lurking somewhere in the back of my mind. Maybe I should work on some prequels this autumn.