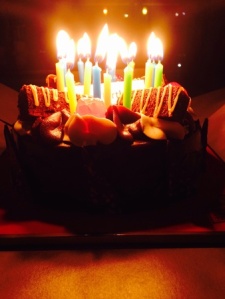 Happy Birthday to us, and cheers! to all our friends here on the blog: Eight Ladies Writing celebrated its fourth birthday yesterday, 2 September. Where did the time go?

I thought about selecting my favorite posts of the last four years, but it was just too hard to choose. If you have the time, and you are so inclined, check out our archive. We have a bank of almost 1,400 posts for you to browse and enjoy.

Instead, I decided to hold a traditional birthday celebration today, with champagne, cake, candles, ice cream, and gifts. That is, I picked my favorite fictional moments featuring each of those things 😉 .

If you’d like to join the party by suggesting other festive scenes or books, I’d love that!

Here are my choices:

Champagne
Without question, my favorite champagne-related story is Lord Lovedon’s Duel, a funny, feel-good short story by Loretta Chase. The trouble starts at the heroine’s sister’s wedding, where an excess of champagne leads the eponymous hero to amuse his drunken friends by making cruel and untrue suggestions about the royal groom’s reasons for marrying a wealthy commoner. Unfortunately he is overheard by the bride and her sister, Chloe, the heroine. Chloe is incensed on her sister’s behalf. She’s also more than a little tipsy, so she confronts Lord Lovedon in front of his idiot friends, slaps his face with her glove, dashes a glass of champagne in his face, and challenges him to a duel. Lovedon’s response is as kind and funny as his original remarks were hurtful. There’s a glorious epistolary exchange, culminating in pistols at dusk in Battersea. This story is a clever, perfectly formed hit of happy. I wish I could write something half as good. I love everything about it.

Cake
There’s a spectacular cake-fest in Tessa Dare’s Say Yes To the Marquess. The heroine, Clio, has been waiting eight years for her fiancé to come home and set the date. She decides enough is enough. She inherits a castle (as you do), so she resolves to break her engagement and start a brewery instead. Rafe, the Marquess’s prize-fighter brother, sets out to change her mind by planning the wedding for her—flowers, dresses, cake and all. Guess which guy she marries? It’s a little disturbing that I think the cake extravaganza is the highlight of the book, but the descriptions made my mouth water. Do not read if you are hungry or on a diet. The whole story is a frothy, sweet meringue of delightfully enjoyable silliness.

Candles
There’s the barest whisper of romance in Terry Pratchett’s Feet of Clay–a fantasy, comedy, murder mystery starring my favorite fictional City Guard, Commander Sam Vimes. There are sharp social observations and excellent jokes; aristocrats, artisans, dwarves, werewolves, vampires, golems, and Mr Arthur Carry, a socially ambitious candlemaker with his very own newly-designed coat of arms. If you read Pratchett, you’ll probably know the book. If you don’t, you should try him, and this book is a great place to start.

Ice Cream
We Ladies spent much of our first few months on the introductory course of the McDaniel College romance writing program arguing about Susan Elizabeth Phillips’ football romance Heaven, Texas. We picked the book apart so assiduously that I haven’t read it since, but when I thought ice cream, it was the obvious choice. One of the early turning points of the romance arc between recently retired hotshot quarterback Bobby Tom and late-blooming wallflower Gracie is an argument that becomes an ice-cream fight that turns unexpectedly sexual. Whoo!

Presents
My first choice for a great fictional gift was a no-brainer: as soon as I say Jenny Crusie, the other Ladies will know exactly what I’m talking about. In Agnes and the Hitman, Jenny’s collaboration with Bob Mayer, the hero (Shane, the hitman) buys Agnes, the heroine, an airconditioning unit. It’s not pretty or romantic, but it is exactly what she needs, and he buys and installs it with the minimum of fuss. It shows that he’s thinking of her, that he understands her, that he’s the perfect man for her. Best gift ever.

Likewise, in Loretta Chase’s The Last Hellion, the hero, Ainswood, is titled, rich, handsome, dissolute, and a whole lot smarter than he lets on. After a ferocious battle of wills he finally persuades the redoubtable Lydia Grenville, journalist, novelist, and social crusader, to marry him. Instead of jewels and dresses, he sneaks into town and buys her an armful of gifts—a portable writing desk, pens, paper, ink. Again, the hero’s choices show that he understands and admires the heroine for who she is and send a very clear signal that he does not expect her to compromise as a consequence of their marriage. I love Ainswood. I love The Last Hellion, maybe even more than Lord of Scoundrels.

Do you have any bon-bons to add to my decadent birthday selection? Maybe a great scene with a delicious box of chocolates, or balloons, or fireworks?