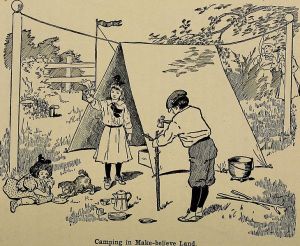 Or making believe in Camp-land! Turn your backyard into a summer camp for intensive writing! (Image via Wikimedia Commons)

At work, school’s out, but we had some special classes for summer. The original concept was to provide something fun and like a summer camp, buta camp with no budget, and that finishes in 60 to 90 minutes. It’s understandable that with those kind of constraints, our “camp” is more “class”, but I wanted to get back to the original concept this year, so I started googling “summer camp language activities”.

And as with so many things in life, I didn’t find what I’m looking for, but I found something useful. I came across a camp that had such a sensible format and division of activities that I thought, “Hey, I could do this at home with my writing.” An auto-camp, if you’ll excuse the bad and old-fashioned pun.

This particular camp divided the day into six one-hour periods. The classes either go toward a major or a minor, with majors being something the kids want to delve into more deeply. Minors are one-shots that can be completed in an hour, and they provide a chance to explore new things.

So, on a vacation day, in theory, I could minor in laundry, American comedy TV and ratatouille, while majoring in writing, with a “class” in reading old material, one in writing new material, and a third in blogging. Six hours done, I could go outside, build a charcoal fire, grill some meat and pitas and enjoy strumming my ukulele under the stars – and go to bed with a clear conscience that I’d done good work that day.

I had the opportunity to give my summer camp idea a dry run two weeks ago, and results were . . . well, let’s say that results were mixed. I planned to major in writing, of course. I was going to read old material for two classes, cook lunch for one class, have a nice lunch, and then write for two classes and blog for the third in the afternoon, with a nice nap stuck in there somewhere.

Almost immediately, my plans went awry. Laundry spilled over into my first period and second period. I sat down and read diligently, though, for a couple of hours, when I realized my blog needed to be done. Then, a mama-taxi emergency happened, so everything got put on hold. I came home, did my blog, and spent the rest of the long weekend majoring in family stuff and YouTube.

It sounds like a total failure, but I have to say, it wasn’t. I still got my blog done, and did some important reading that I need to do to move forward.

In two weeks, I’ll have the chance to try out this camp idea again, and having had a dry run, I know a few tricks to keep things moving.

First, get the laundry done the evening before camp, or just plan to major in laundry on Day One. (Laundry really is my bug-a-boo; I don’t have a dryer and I don’t want a dryer, but I must time things carefully to coincide with sunny days.)

Second, make food ahead of time, and plan on sandwiches for at least one meal. Six hours sounds like a lot of time, but it really isn’t when it comes to reading and writing. I have three stories that should take about six to eight hours to read when they are done, so I need to plan for at least four hours of reading for what I’ve got. No time for harvesting vegetables and carmelizing onions and eggplant.

And remember, even if things don’t go to plan, just by having a plan, you probably got more things done (one way or the other) than you would have with no plan.

I can’t wait to give it another try! I do hope I get some ukulele time fit in to the evening program this time around.

(I know WordPress will recommend some items related to this post, but we’ve had several wonderful posts about writing retreats on Eight Ladies Writing. Give these a try! And if I’ve missed some — I think I have — remind me in the comments.)

Kat talks about dream retreats. Check out the comments for more ideas! https://eightladieswriting.com/2014/05/30/kat-writers-retreat/

Justine outlines her plans for her first retreat for the Eight Ladies — be sure to click through to Part Two! https://eightladieswriting.com/2015/01/20/justine-covington-writers-retreat-a-newbies-guide-part-1/

Nancy talks about her established retreat with writing friends. There are links to her older posts about retreats, too! https://eightladieswriting.com/2017/05/01/nancy-retreat-recharge-and-reclaim-your-writing-mojo/