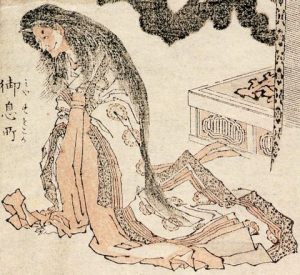 Dead or alive, when Grandma is happy, everyone’s happy. (Image via Wikimedia Commons)

Long story, and we’ve got time, don’t we?

So, I cleaned house for much of the morning. Last night, my mother-in-law said, “The Temple is coming tomorrow at 9:30.” No, not the whole thing – just the Buddhist priest, who comes a couple of times a year to . . . I’m not quite sure what the theological underpinnings are. To bless the house? To say “hi” to our deceased family members with a speedy little sutra? At any rate, he comes, he recites a prayer before our household altar, then he has a little tea and some cookies, and heads off to the next household. The most important dates are spring equinox, fall equinox and Obon, which people in my area reckon to be about August 15.

Today is July 8. The nearest date of any legendary significance is Tanabata – the star festival when the lovesick weaver and shepherd get to cross the Milky Way and have a night of joy before heading back to work. That’s officially on the seventh day of the seventh month, but time isn’t a straight forward concept in Japan. The holiday is often reckoned by the Buddhist calendar, which is moon-based and wanders through our Gregorian year like a tipsy secretary at the office picnic. That would put 7/7 (Buddhist style) on August 28, this year. But for the sake of convenience, people in my area usually celebrate it in early August.

Interestingly enough, Wikipedia tells me that this celebration was originally from a “festival to plead for skills”. Huh. I ought to get me some of that action. Mark it on my calendar for August 28 . . . .

Ahem, excuse me for wandering off. Let me get back to the point: I spent the morning cleaning up the living room and tatami room for the priest, and then while I was in the shower, I started resenting the situation. You know how it is. You start to do something because it’s the Done Thing, but as soon as you get a moment to yourself, you start wondering why it’s the Done Thing, and why does it have to be Done today when I could have been sleeping in?

Obon, the festival of the dead returning home, happens around August 15. Our priest is more than a month early! How is this supposed to placate our ghosts? Well, I have to admit, our ghosts aren’t that demanding. They are probably fine with the timing. But I think it’s a little bit strange. What if we had ancestors who were feeling a mite vengeful and ready to take offense at the slightest slight? We all have a relative or two like that. Would we ask for our priest to come back at the proper time, or arrange for a near-Bon visit? Or would the guy be too scared to deal with vengeful, needy ghosts? I haven’t heard of any in the neighborhood, and our Buddhist priest is a young guy who just took over from his dad a couple of years ago. Fresh out of Buddha school, so to speak. Would he be able to recognize an ancestor problem, or would we only know we’ve got Hungry Ghosts when the jam starts disappearing from the fridge, and the pantry gets spun around like a poltergeist movie?

Note: I don’t believe in dead people. It’s probably my sole article of faith: I don’t believe in dead people. I like ghost stories and I want to write them, but I have absolutely no use for spirits in my real life. So, why am I worrying about all this in the shower? It all gets back to resenting, I suppose. If I’d been allowed to sleep in, I wouldn’t have had time to spin the whole situation into a roomful of ravening ghosts and ineffective priests and helpless people just trying to keep the peace between the living and the dead.

Okay, fine. My point is that our priest isn’t really reinforcing the underpinnings of the magical system. Generally, this is a good thing, because it allows all of us to get away with crap. He can visit his households at a leisurely pace a month before the big rush. We can leave our offerings of fruit and flowers in front of the altar at the Temple for 15 minutes, then take it home so it doesn’t rot in the August heat.

But I have a sneaking suspicion that none of us really believes in what’s going on.

Which is fine. Superstition is a terrible taskmaster to live under.

However, if you are writing fiction, you need to make it believable. Secure your belief system! If your ghosts need to show up on August 15 or October 31, do that. Don’t send them in a month early or a month late. If garlic burns Character A, it always burns Character A, so no Spanish meatballs for Character A.

Even if you aren’t writing fantasy, this also holds true. Your system has to be sturdy. Being an arrogant cad can’t be horrible one minute, and then perfectly fine the next unless things happen to change the system or the character. The same goes for other behaviors.

And, all things considered, I have a clean living room out of the deal, so I shouldn’t complain too much.