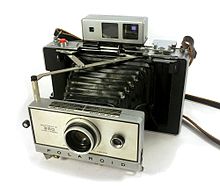 Recently I had cause to go through some boxes of family photos.  My brother is in the process of transferring old home movies and things onto DVDs and he came across some footage from a long ago Christmas that included, among other things, a box full of puppies.  For the life of us, neither of us remembers that box of puppies or has any idea where they came from.  I was hoping I might have some still photos of the holiday, but no such luck.  Rather, I found photos from what I think was that day, but there was nary a puppy in sight.

Along the way I got distracted by the photos themselves – specifically the hair and clothing styles, not to mention the furnishings and decorations.  I think I flipped through about thirty years’ worth of photos in about an hour.  Whether taken with an old Polaroid, a Kodak Instamatic, or modern digital camera, my family has a definite fondness for taking pictures of people taking pictures and we seem to be incapable of taking a group shot free of someone making a face or having their eyes shut.

Most of the photos I have reside in scrapbooks, but there are a few boxes left to deal with.   That, however, will have to wait for another day.  As I noted in this past Monday’s accountability post, I’ve done an excellent job reading recently, but not such a good job with writing.  I’ll be focusing on changing that this weekend.  To kick things off I think I’ll start with a little Random Word Improv.

Regardless of whether you’re finishing up a manuscript, daydreaming about a new story, enjoying a bit of vacation, or just trying to make it to the end of another work-week, a few minutes of Random Word Improv are a great way to have a little fun and get some words on the page.  So pull up a chair, put on some mood music and let’s get writing.

Today’s random words are photo-themed, but don’t let that constrain you.  In keeping with our recent trend, bonus points if you manage to include a box of puppies in your sprint:

For any of you new to Random Word Improv, here’s how we play:

*whistling aimlessly while you are off being creative*

Ah, you’re back.  Kind of fun, right?  Can’t wait to see what you have come up with

5 thoughts on “Elizabeth: Friday Writing Sprints – Smile for the Camera”