Anyone else ready for a break from reality? I hope so. I’m in need of some super-glamorous, exceedingly outré wardrobe suggestions.

Alexis, the heroine of my fantasy WIP, accompanies Kierce, the hero, to a very OTT aristocratic celebration. Something as showy as the Oscars, hosted by royalty, but in a horses-and-swords kind of world. Alexis was raised in a monastery; she’s spent her whole life passing as a boy, so it’s challenging enough for her to have to act and dress like a female. To glam up, and preen, and flirt is her idea of a nightmare.

It’s mine, too, which may be why I’m struggling with her wardrobe.

Alexis is going to the party as a woman, but afterwards she expects to revert to her monkish persona and she needs to do her best to stop other characters from joining the dots. She’ll wear something very feminine, flashy and distracting, so that people will remember the outfit and not think too much about the person wearing it. She has a lot to disguise: she’s six feet tall, very underweight, with strong features and a shaven head.

I’m thinking her head is the most obvious problem, so maybe I should start with that and build the outfit around it. I want to disguise her lack of hair without making it look like a cover-up. The obvious move would be to give her a wig, but I don’t want to do that. When Alexis finally gets hair, it will be her own.

I have some thoughts:

Kierce’s father, a retired soldier, grows flowers that Kierce’s mother and sister sell. The sister, Mirel, also makes the family’s clothes and has an eye for design. Mirel is the one who’ll be responsible for Alexis’s party outfit. She’s used to working with flowers, real and imitation, so I was thinking maybe she could make Alexis a stunning flower headdress (I guess they’d have to be fake) and a matching flower-embellished dress. See the sketch at the top of the post for the kind of look I had in mind. 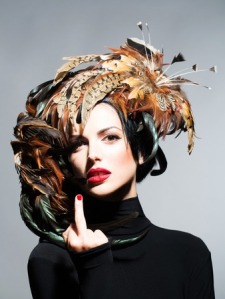 Or what about this? Feathers would be easily accessible and a clever needlewoman could make something dramatic and frou-frou. Do you remember Ginger Rogers’ legendary ostrich feather dress from Top Hat? If you don’t, check out the photos here. Something like that, with lots of movement, would be fabulous.

I really like this beaded flapper cap, but it gives a neat, rounded head shape and I’m not sure whether it would be distracting enough, or whether a beaded dress would have enough volume.

At this stage Alexis is all skin, bone and sinew, so I think she’d want to show as little flesh as possible. Lurking at the back of my mind are the costumes for the ballet La Bayadere, a flashy love triangle starring a warrior, the temple dancer who loves him, and the Brahmin’s daughter who marries him. Modern ballerinas are strong but have whip-thin bodies and I’ve often thought they look fabulous in the golden, glittery, evil princess dress, but the gauzy bikini top and harem pants of the temple dancer is challenging. Alexis is taller than a dancer, but I think she needs shape and volume and lots of flash.

I was initially thinking that she’d have to wear flat shoes because she’s so tall, but Kierce is taller so I might make a virtue out of a necessity and give her heels to go with her headdress, which would make her as tall as him. I’ve heard ballerinas say that after years of dancing on pointe, high heels are a breeze, and with a lifetime of martial arts training, Alexis has great balance. Heels would make her walk differently, too, and they’d be fine from a world-building perspective. Did you know high-heeled shoes have been around since Ancient Egypt, and were much favored by European royalty in the 16th century? Check out the mules shown on the left—according to Wikipedia they belonged to Catherine the Great.

What do you think? I’m off to check out this year’s Oscar dresses to see if further inspiration is to be had there.

Right now I like the flowery cap, but I love the idea of my girl in heels and a Ginger Rogers-y fluffy, floaty feather dress.

Any and all suggestions most gratefully welcomed 😀