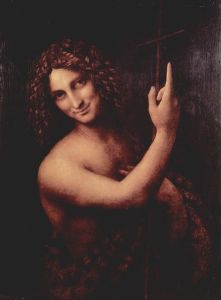 Does it matter if the lover is a boy or a girl? In some details, yes. But a lot of technique is transferable. (Image via Wikimedia Commons)

We’ve been talking about sex scenes this week on Eight Ladies (Kay’s post on February 2), and my book rec for the month is Charmed and Dangerous, a collection of short gay fantasy stories written by women and edited by Jordan Castillo Price. The ten stories are well-written, exciting and full of creative ideas that take paranormal romance and urban fantasy to interesting places. Goodreads link.

The sex scenes have a different dynamic than any of the straight romance I’ve read. Women have this idea that men are ready for action at any minute. I’m not sure if that is acute observation or just urban legend, but there it is. In a straight scene in a straight romance, often the woman is worrying about something: her reputation, her own feelings for this guy, the meaning of the sex, and so on and so forth.

Generally in the scenes in this book, sex is sex. It doesn’t have to mean a thing – as long as the two gay men are in a romantic situation with mutual attraction, there doesn’t seem to be a reason (in this fictional world) for them not to have enthusiastic sex-in-the-moment. So, they drop everything to do so, and have a few paragraphs of sweaty, happy sex, which turns out to be deep and meaningful (the most intimate sex ever) because after all, we’re talking about subsets of the romance genre. The characters often go in expecting orgasms, and come out with orgasms and the love of their lives.

The big question is, can this be applied to straight romance scenes? Last night, I was re-reading Getting Rid of Bradley by Jennifer Crusie, and thought the sex scenes were quite good. Both characters went in with Reasons We Should Not Have Sex, but somewhere during the scene, lost their minds and just had sex. The Best Sex Characters Have Ever Had, of course.

And, in both the stories of Charmed and Dangerous and in Getting Rid of Bradley, the sex changed things. When you’ve had The Best Sex Characters Have Ever Had, you want to repeat the experiment – that goes for the characters, and for the reader vicariously enjoying the sex.

The question of when to close the bedroom door depends on when the characters realize they’ve had TBSCHEH (ooh, don’t like that acronym; sounds like bronchitis – let’s shorten it to Best Sex). If they realize it during the act, the act should be shown. If they realize it during the golden afterglow, then if the author is squeamish about showing sex, I don’t think it needs to be shown. That golden afterglow better be pretty golden, though. You must show the happiness, not just talk about it while catching your breath. I think it can be shown in either stage.

Like anything, I think (I think! I have only written a few actual sex scenes, and haven’t shown them to anyone) a writer needs to do a few things. One, read good sex scenes. Two, it’d be nice if they experienced good sex in real life that changed everything. And three would be practice, practice, practice. Perhaps in a sex scene diary, or make a project of writing sexy stuff three times a week in the evening.

(-: This month would be the perfect month to start. Love is in the air, the bed is a warm and delightful place to be, and batteries are on sale everywhere! Don’t dither! February is a very short month, and we should get the most out of it.

14 thoughts on “Michaeline: A Different Kind of Sex Scene”