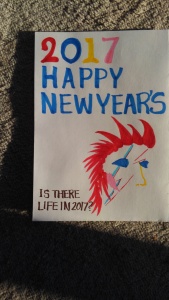 Wishing you a New Year’s full of creativity and surprise! (Original artwork by Emily Duskova)

First of all, let me wish you a prosperous, productive 2017, full of stories and fun! It’s the year of the Rooster in Japan, and soon enough, we’ll be able to celebrate Chinese New Year on January 28, so if you missed your goals for Occidental New Year, there’s a second chance coming soon! Clean, plan, and get your eggs all in the proper basket, LOL!

Today, I have lots of little things to clean up. How did last week’s puzzle work for you? (Missed it? You can play HERE.) I had a house full of relatives and didn’t get very much writing done, except for the writing sprint. This week will be better! But that said, I do think my week was full of: 1) HOPE, 2) STRENGTH, 3) FORGIVENESS, 4) PERSPECTIVE, 5) LOVE, 6) ROMANCE, and it was 7) FANTASTIC, all things considered, LOL. 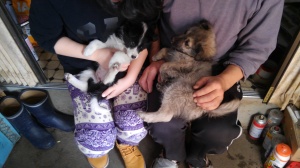 These characters have names! Nana (squirming on the right) and Rex (chilling out on the left). (Photo by Michaeline Duskova)

Strength, perspective and forgiveness were particularly helpful with our new puppies, who learned the new tricks of chewing up a lot of mats and escaping from the puppy house. Right now, with lots of walks, we’ve come to a detente for now. But honestly, it’s like the Red Queen theory of competition – we have to keep running to just stay in the same place. As soon as we devise a method of containment, the puppies seem to come up with new and unexpected levels of deviltry. It’s a good thing they are so adorable! I told you last year that I’d announce their names. After much negotiation, we’ve come up with Rex and Nana. Rex is a hard name for Japanese mouths to say, but he’s such a Rex . . . . My friend shared the story that she has buddies who named a dog “Rex” because he “wrecks” everything. I hope our doggie takes the more kingly and noble aspects of the name!

There was one more thing I wanted to mention. New Year’s is a time of new beginnings, and in Japanese culture, the First Dream (usually the dream you have on the night of the first or the morning of the second day of the year) is supposed to have special meaning. I was good enough to make a memo on my phone when I awakened, but then I promptly forgot most of the details. I seem to remember that Robert Webb (of the hilarious comedy team, Webb and Mitchell) was in it, possibly in Japanese men’s ceremonial dress. The only thing I’m sure about is the memo on my phone, which declared: “2017 is not a contest!!”

Contests impose their own rules on a creative endeavor, and that can be good. It can provide deadlines, and make you explore your work from angles you wouldn’t normally consider. But it can also make you lose sight of your own rules – the rules that makes a work satisfying to you. So, my goal for 2017 is to pay attention to my own personal rules; if they happen to coincide with other people’s rules, great. (-: If I happen to win a contest in the process, super. But the real deal is that when I read back my work in December, 2017, I feel good about what I’ve gotten on the page.

So, I’m wishing all of you a very happy 2017, and may your December be full of satisfaction for the year that was.