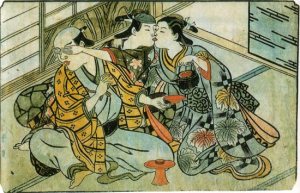 Oh, we could be heroes, or villains, depending on the secrets we keep. (Image via Wikimedia Commons)

I’ve been thinking about my “villain” this week. I put it in quotes, just like David Bowie’s “‘Heroes'”, because she’s not really a villain (See songfacts.com for the story behind “‘Heroes'”). She’s the heroine from some points of view, and her weakness is a certain determination to follow the plan to the bitter end, no matter what crops up in the meantime. She gets sidetracked from her goal in favor of The Plan, and she becomes a tragic heroine (or a foiled villain, depending on who you are rooting for).

The thing is, she is steeped in secrets. There’s a lot about her that even I don’t know about. She tells me it’s really none of my business. The supernatural world she lives in is full of secrets, too. It’s considered a serious breach of etiquette to pry into other creatures’ magical business. Oh, their friendships and sexual alliances and business partnerships are all fodder for a busy rumor mill, but there’s a reticence about talking about magic unless it’s between two dear friends having a very intimate gossip under the moonlight.

And Nixie has been under a geas (What’s a geas? See TVTropes. Or Wikipedia.), which is a magical compulsion to do something. Usually, one of the corollaries of a geas is that the Bound Being cannot talk about the geas. It makes sense; it muddies the trail to the original spellcaster. Can you imagine? You come up to your girlfriend who has suddenly taken up tunneling under castle walls, and ask her what’s going on. “Sir Roland put me under a geas, and I would really like to go home and fix my nails.” You’d go after Sir Roland, right? But if the girlfriend starts stammering and swearing and can’t give you anything concrete . . . well, it’s going to take some time to figure out that Sir Roland is the cause of all of this.

So, Nixie has been under a spell that prohibits her from talking about a major motivation. Now she’s free. Does she talk about it? Under what circumstances?

In our society as a whole, secrets definitely have their place. That said, we walk a fine line between holding secrets and being misunderstood, and being very open and honest and being understood too well. Secrets can give us a sense of belonging in a club . . . and that sense of belonging is very important to humans as social animals. Right up there with sex, power and elephants. On the other hand, secrets can be shameful and corrosive.

I don’t think I’m a natural secret-keeper. Of course, I can do it, but I don’t always recognize the hints that something is supposed to be kept in confidence. You have to tell me . . . . I like to talk, I like to share information, and I think that informs my choices to be a writer and a teacher. So, is Nixie like me? Is she a secret-keeper because she was forced to by duty, circumstance and culture? For her, secrecy also provides a lot of safety from both mere mortals and lovers. Or does she like weaving a web of mystery? Is she the kind of creature who finds her power in keeping information to a minimum and doling it out only to her favorites and those who can help her? Does she look at the truth as a commodity and a weapon?

Secrets can lead to the dreaded “stupid misunderstanding”. But sometimes, our characters have very good reasons for keeping things secret, and for hoping that being misunderstood will be easier than being honest and open.

So, that’s what I’ve been wrestling with this week. Have you read any stories where a secret has been used with particularly stunning results? I’m having trouble thinking of anything right now. I mean, every mystery has a secret at its core. I can’t think of a single thriller that didn’t have a hidden aspect only revealed gradually. On that level, I can think of a thousand examples of good secrets. I don’t know what I’m looking for. Maybe the secret that didn’t really seem to be a secret? The unusual secret?

Oh, here’s one: the middle of The Crying Game where rocky biography suddenly gains stakes, and becomes thrilling (IMDb). I remember watching that one in Japan in a theater full of foreigners, and when that secret was revealed, when the girlfriend was shown to be a boy, there was such a gasp that arose from the audience!

One of the most annoying comments afterward, I remember, was a friend saying, “It wasn’t a surprise to me. I was wondering why that guy had a wig on during the first part of the movie.” Suddenly, she was a part of a different club, she was one of The Ones Who Knew. It was a cooler club, but it must have been a lonelier club, I think . . . .

Secrets bind. Secrets divide. Secrets cover a wound like a bandage, leaving it to heal or fester. Secrets.

5 thoughts on “Michaeline: Nixie Voss and the Culture of Secrets”