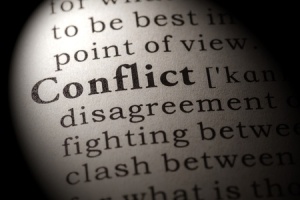 Welcome to Part 3 of Fiction Fundamentals. In Part 1, I discussed character goals. Last time, in Part 2, I covered a character’s Motivation…the “why” of what they want to do in your story.

This installment (the first of two) is about the Big Enchilada that ties it all together and makes for a good read: Conflict.

Before getting into the meat of this, let’s set some expectations about conflict:

“If conflict makes you uncomfortable or you have difficulty wrecking the lives of your characters, you need to consider another line of work. In commercial fiction you need strife, tension, dissension, and opposition. If you omit these elements, you won’t be able to sustain the reader’s attention. Even in romance novels – known for their happy endings, sufficient conflict must exist to make the reader doubt the happily-ever-after.”

The net-net? YOU NEED CONFLICT! Readers want to see your characters work hard. To see them fail, then try again. And ultimately, to see them succeed after overcoming obstacle after obstacle.

So what’s the problem with not having conflict in your book? Without conflict, you have no rising tension, no crisis point, no point of no return…nothing. You have two people with perfectly uninteresting lives, just going about their day with no issues, and that’s boring. Even two characters arguing through the whole book is boring. There’s no action. What makes a book so engaging and difficult to put down is each character trying to circumvent the other to get what is their heart’s desire.

To that end, conflict should be in every scene. If there’s no conflict, then why is the scene there? Are you writing infodump? Backstory? Things You Think The Reader Must Know? That’s not what scenes are meant to do. Each scene is a step up the mountain towards the climax, and conflict serves to escalate the tension as the characters reach the peak. It doesn’t mean that each scene has to have super-intense conflict or major, life-threatening actions (although those can be good), but there needs to be a battle, however minor, of two characters’ goals and their resulting actions, which create conflict. 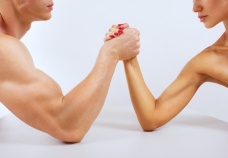 When you are working out the conflict for your characters, you should first define it at the story-level for your protag and antag (and any other major characters, but those two at a bare minimum).

Lisa Miller teaches Story Structure Safari, an awesome class that helps you plot out your novel to create a detailed outline before writing. One of the first things she does is has us identify our Safari Plotline. This is the story promise…what we are delivering to the reader. In it, you identify the goal, motivation, conflict, and action for your story.

Hopefully, you’ve already identified the goals and motivations for your characters based on the last two installments. Now let’s add in the conflict part.

[PROTAG/ANTAG NAME] needs to [WHAT MUST THEY ACHIEVE?] because if s/he doesn’t, [WHAT PERSONAL LOSS WILL OCCUR IF GOAL ISN’T ACHIEVED?], but [WHAT IS THE MAIN FORCE, ISSUE, PERSON, PLACE, OR THING THAT OPPOSES THEIR SUCCESS?], and so [WHAT ACTION MUST THEY TAKE IN ORDER TO OVERCOME THE OBSTACLE/CONFLICT?]

Here’s the Plotline I created for my protagonist for Three Proposals:

Susannah Cressingham needs to claim her inheritance because if she doesn’t, she won’t be able to save her sister from an abusive marriage, but her uncle (and guardian) wants to marry her to his friend and split her dowry, and so she pretends to marry the spy investigating her uncle for treason.

This is the plotline I created for my antagonist, her uncle:

Alastair Cressingham needs to marry his niece to his friend, who’ll split her dowry, because if Cressingham doesn’t, he won’t be able to get the money he needs (and the position that goes with it) for Napoleon upon his return, but Susannah marries a spy investigating him for treason, and so Cressingham has the spy arrested for illegally marrying his niece and then accuses him of treason.

And lastly, this is the plotline I created for Susannah’s love interest, who is an antagonist to both Susannah and her uncle:

Nate Kinlan needs to find evidence to prove Capt. Alastair Cressingham is a traitor because if he doesn’t, he will never be able to put to rest the death of his close friends and fellow spies, but he can’t get close enough to Cressingham to search for evidence, and so he courts Cressingham’s niece and proposes a masquerade marriage.

What are the actions that create the conflict?

Those are three big things happening among three characters, each with big-time goals. In the second installment of this post on Conflict, I’ll talk about story- vs. scene-level conflict.

Once you’ve identified your story conflict, it’s time to see if there is a conflict lock.

In the McDaniel Romance Writing program, Jennifer Crusie taught us the Conflict Lock (introduced by Michael Hauge). To quote Jenny: 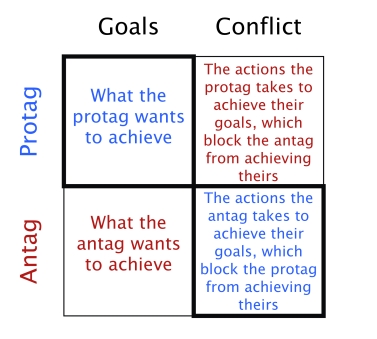 Cinderella is a great story to explain conflict, so we’ll use that as the basis for this discussion.

Cindy’s stepmom knows that if the prince managed one glance at Cindy, he’d abandon any interest in her daughters. Cindy is beautiful. She’s sweet. She’s got a heart of gold and any man would be taken with her.

Since Stepmom took over the household when Cindy’s dad died, she’s done nothing but subjugate Cindy, showing her that her place is with the staff, not the family. Stepmom has also done everything she can to elevate the interests of her daughters. To have Cindy attend the ball would be like shooting herself in the foot.

Let’s see what sort of actions each can take to achieve their goal.

Now let’s look at this as a conflict lock.

The action that Cindy takes (complete the list of chores, make a dress) fly right in the face of what Stepmom doesn’t want, which is Cindy attending the ball. As a last resort, the Stepmom tears up Cindy’s new dress.

Because the actions one character takes directly blocks the actions of the other, we know we’ve got a good conflict lock.

Take Time to Develop Your Conflict

Conflict is something I struggled with quite a bit in the McDaniel program. Eventually, it got easier as time went by, but I still make the mistake of having a conflict lock for my protagonist, but not for my antagonist, or vice versa.

When you’re working through your character’s conflict, keep two things in mind:

It may take time for you to figure out what would make good conflict in your story, but don’t give up and don’t get lazy, either, because if your conflict is rotten, your story will be rotten, too.

Today’s post is an introduction to conflict and the basic idea of what story-level conflict is and how to construct a conflict lock. In the next installment on Conflict, I’ll talk about scene- vs. story-level conflict, as well as the difference between conflict, trouble, and misunderstandings, then wrap up with some tips and suggestions.