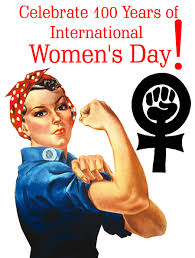 As a romance writer—a female writer whose books put women and their goals in the center of the story—I have to commemorate today, March 8, even though I’m a bit late here! International Women’s Day is celebrated around the world, but less noticeably in the United States. The holiday celebrates women’s achievements, even as women use the day to organize for social and political rights.

The earliest Women’s Day observance was held on February 28, 1909, in New York in remembrance of the 1908 strike of the International Ladies Garment Workers Union. One hundred delegates from 17 countries to the second International Women’s Conference, held in August 1910, agreed to promote equal rights, including suffrage, for women, and by 1911, more than a half-million Europeans marked the day with 300 demonstrations. In Vienna, women carried banners honoring the martyrs of the Paris Commune. Women demanded that women be given the right to vote and to hold public office. They also protested against sex discrimination in employment.

In 1917, International Women’s Day demonstrations in Saint Petersburg initiated the February Revolution. Women in Saint Petersburg went on strike for “Bread and Peace,” demanding the end of World War I, an end to Russian food shortages, and the end of czarism. Leon Trotsky wrote, “…we did not imagine that this ‘Women’s Day’ would inaugurate the revolution…. in morning, despite the orders to the contrary, textile workers left their work in several factories and sent delegates to ask for support of the strike… which led to mass strike… all went out into the streets.”

We don’t really see that kind of activism on International Women’s Day any more, but the issues it raises are still relevant. Whoever thought that Jennifer Lawrence and Patricia Arquette would be raising the banner for equal wages? Women everywhere earn roughly only three-fourths of what men earn, and women—at least here in the States—are not represented in Congress or on corporate boards in anything near parity.

So it’s important to keep those issues front and center. And while we’re at it—put them into our books, too.

And just for fun, and since Jilly was just talking about playlists, here’s an International Women’s Day playlist, courtesy of National Public Radio.