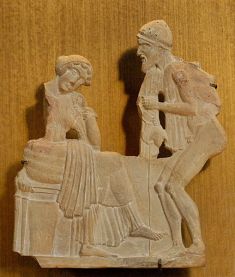 In this terracotta relief circa 450 BC, Odysseus, disguised as a beggar, tries to make Penelope recognize him.

Last May, I completed my Master of Liberal Arts program, and many of you know that my final project was a contemporary romance based on Sophocles’ Antigone (which is also a hero’s journey). My interest in ancient love stories was piqued and I’ve been looking at more to see if I can use them as fodder for other stories. I think a writer friend of Justine also uses ancient couples as fodder for her stories. In Harry Brown’s updated version of the story of Achilles and Hector, The Stars in Their Courses, he took the story out of ancient Greece and set it in the Old West. Achilles becomes Arch Eastmere, a gunslinger, hired to help Mark Lacy (Menelaos) get his wife (Ellen/Helen) back from Pax (Paris) after Pax abducted her. Brown brings other characters along on the ride, including Hallock (Hector), Alan (Agamemnon), and Oliver Swindon (Odysseus). There are a lot of parallels between The Iliad and The Stars in Their Courses, but Brown switched some of it up: Achilles fights from great glory in battle, but Arch Eastmore does it for a paycheck; there are no gods, but the weather and the land are described using terms that give them power over man; and he adds a hooker for Arch and the sheriff to fight over.

The problem I’m finding with looking to the ancient (or old) love stories is that many of them end badly. Okay, I thought of love stories as a good match for February with Valentine’s Day coming up, but this is straying a little from the HEA. Paris and Helen lead to the downfall of Troy and the death of Paris. Eurydice dies on Orpheus and when he tries to bring her out of the world of the dead, she falls back in. Tristan and Iseult (much like Lancelot and Guinevere) were adulterers and they both die. Let’s not forget the fake death, subsequent suicide stories like Pyramus and Thisbe and the very similar tale of Romeo and Juliet.

The story of Psyche and Cupid has potential, particularly the version that has them fighting to stay together despite a lot of outside interference. There are several versions of the tale, but I like the one that has Venus sending Psyche on a hero’s journey to accomplish a series of difficult tasks in order to get Cupid back while Cupid is fighting his own demons to get back to Psyche. They eventually have their HEA and Psyche becomes a goddess.

Many old tales have been updated to contemporaries. Beauty and the Beast has been done many times, along with Cinderella, Snow White, The Ugly Duckling, and others. Recently there has been a spate of live action remakes of old tales. I’m looking for one that is off the beaten path.

What other old love stories are out there? How have they been updated to fit a modern world?