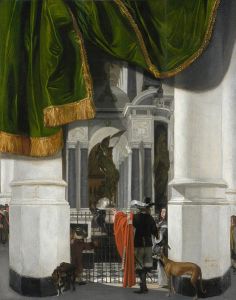 Green curtains can stick in the mind for a very long time. (Image via Wikimedia Commons)

Originally, this post was going to be about events that boost the turning points of a story, but then in walked Scarlett O’Hara. And I don’t know about you, but when Scarlett O’Hara walks into my brain, I pay attention.

Now, I think it’s well established that Scarlett O’Hara, the heroine of Gone With the Wind, is not just a racist, but an all-around sociopath. With a few possible exceptions (and they mostly die during the course of the book), if a human being does not advance Scarlett’s sexual and/or economic agendas, the person has no value in her eyes and may be trampled over at will. She treats everyone like objects.

That doesn’t make her a very likeable character, and one of the pieces of writing advice we often run across is, “Make your heroine likeable.” Very good, very serviceable advice. But Scarlett swooshes right past the writing rule, because rules don’t apply to Scarlett.

One of the key moments in the story is when she decides to save her home from the tax collectors by wheedling a loan from Rhett Butler, a handsome rake who has been imprisoned by Reconstructionist authorities.

It’s a huge turning point. Scarlett, in this episode, has been struggling to lead her little band of relatives and ex-slaves to some sort of financial independence and comfort after the Civil War. The house had been looted and vandalized, they’d all been working in the fields, they’d all been living on a starvation diet, and now they were going to lose everything.

Of course, the woman has nothing professional to wear to the interview with Rhett. So, she does the thing which so typifies why Scarlett continues to be a worthy heroine despite her flaws: she tears down the curtains and makes a fashionable dress out of them.

What a booster rocket to this turning point! It shows so much in terms of characterization. 1) Scarlett is very practical. 2) She can see beyond the surface of things to different potentials. 3) She’s not averse to scrambling a few eggs to make a goddamn omelet. She’ll tear down the house with her fingernails, if she has to. Never mind her mother’s “portieres”. (Link to short Wikipedia article about portieres.)

Of course, it’s even amazing when after all this work, Scarlett’s ploy doesn’t work. Rhett isn’t able to do anything from prison. So, Scarlett decides to rip and shred the fabric of her family life to make a new world for all of them.

The kind of scene that lingers in the reader’s mind (and maybe even in the pop culture memory) may be some weird little oddball scene that you are tempted to cut. It’ll be oddly specific (green velvet curtains), yet at the same time contain the symbolism and the heart of the whole book, and probably some nearly-universal human truth, as well.

I don’t think a writer can exactly engineer a moment like this. The moment will be a gift of inspiration that can (and probably will need to be) tweaked. And if I knew how to get into the state of mind that produced that kind of gift, I’d make a fortune marketing it.

I think it all comes down to my goal for the year again: write for joy. Turn off the censor for the first few drafts and write what comes. Who knows what sort of green velvet curtains will come into your story?

(Want to see the Green Dress? Costumes of Nashua (LLC) has stills from Gone with the Wind, as well as a still from the Carol Burnette parody. Link here.)