So, here’s my rough draft for a little story of how Bunny got to New York City on Christmas Eve, brought to you through the magic of Elizabeth’s random word generator!

Bunny was not quite so comfortable on the train. She could scarcely contain her excitement about moving to the big city. (I found this at The Old Design Shop. http://olddesignshop.com/2012/12/lake-shore-michigan-southern-railway-christmas-ad/)

I don’t recommend arriving in New York for the first time on Christmas Eve. The train is packed with holiday excursionists, the hansom cabs are taken, and there is no room in the inn, no matter how much money you have. And I didn’t have a lot.
And let’s not even talk about the ghosts. Ah, Christmas Eve, when the veil between the world of the living and the dead is very thin, and the holidays wears everyone’s tempers even thinner. All of the love, the heartbreak, the celebration and the sheer life of the living draws them nearer.
I found a warm drugstore, and was sitting at the counter, slowly drinking my cup of hot coffee, wondering how I was to find a place to stay on Christmas Day, when a drugstore-casanova came in. Oh, he was ready to help me find a place to stay! Such a masher. The ghosts of three poor girls clung to him. They looked like immigrant girls who had caught some sort of consumption. The poor dears were in love beyond the grave.
A rush of patrons flooded into the store, and a soprano voice from heaven commanded the masher to “Move on out, Dooley. You should be ashamed to break hearts tonight.”
She was a red-headed goddess, and I could see the traces of stage make-up around her eyes. She extended a hand. “Sarah Kelso. You look fresh off the boat!”

I took her hand as if it were a lifeline. “Bunny Blavatsky. Stale off the train is more like it!” I brushed sandwich crumbs off my long black mourning. It did look a bit old world here in New York, but it was my second-best. “Say, I’ve been asking everyone in here: where can I find a place to stay in New York? Your Dooley is the first one with an answer, but I don’t want to take him up on it.”
Sarah snorted. “Not my Dooley. Anyway, if you refused him, it shows you’ve got common sense.” She sized me up and lingered on my bags. “Doesn’t look like trunks for you. What on earth is that?”
“Oh, my trunk is waiting in the depot. This is my camera and my supplies. I’m a photographer.”
“Photographer, eh? Any good?” 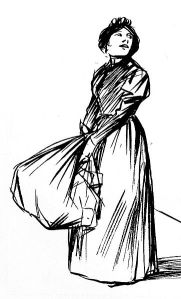 I slid my album from one of the side pockets, and opened it in front of her.
She must have liked what she saw. “Say, I need some pictures taken. If I trade you a week on my sofa for a dozen cabinet photos, what do you say?”
I quickly reckoned up my expenses, and checked my mental calendar. Out on the street on New Year’s Eve? I was reckless, but I thought I’d better give myself a little more breathing room. “Make it 10 days, and you have a deal.”
“Sure!” And that’s how I ended up in the attic of a little boarding house at exactly 15 minutes before midnight. Sarah gave me a blanket and yawned her way under the eaves into what I presumed was another bedroom.
Sarah paused before closing the curtain that separated the two rooms. “Mabel will be in a little later. Her room is over there, so don’t let her bother you. She probably won’t even notice you.”
She said goodnight, then I fished my warm socks out of my carpetbag, and took off my boots. I groaned a bit – it had been a very long day, and I laid down on the sofa, clothes and all. I blew out the candle, and drifted into that kind of twilight sleep you get after a long day – the kind where you aren’t really sleeping, but aren’t quite awake, either.
I became aware of a certain glowing, a gray that was a little bit lighter than the rest of the room. “Who is it?” I whispered.
“Who are you? Where’s Sarah?” the spectre breathed back.
“I’m Bunny.” The gray began to take on aspects of a young woman in a short velvet dress of a chorus girl. If she had been living, she would have been freezing. A horrible suspicion began to dawn. “You . . . you aren’t Mabel, are you?”
“That’s right,” she said. “Where’s Sarah?”
Well. I was pretty sure Sarah wouldn’t be able to see Mabel in her new condition. I sat up on the sofa. “She’s asleep. What’s wrong, Mabel? Maybe I can help you.” I clutched at the bag of herbs around my neck. I hoped I could help her.
“He hit me. I tried to say no, and he hit me.”
Oh, no. “Who, Mabel?”
But Mabel shook her head sadly.
“Can you show me?” She drifted towards the door. I sighed and put my boots and coat back on, and followed. She drifted back down to the street, and past the drugstore. Outside, a policeman stood in the light of the window.
“Hey, lady, what are you doing out this time of night?” He was a handsome officer, and I thought he might be a useful ally in whatever was going to happen next.
“My friend hasn’t come home yet.” I turned on the helplessness, and batted my eyes. “Oh, officer, I am so worried. Would you please come with me? I’m so afraid of what I might find!” Which was no joke.
New York’s finest offered me an arm to help me over the snowy sidewalks, and I followed the ghost. The policeman didn’t seem to notice, and I was very grateful that Mabel was making a bee-line to where ever she was going. It made me look like I knew what I was doing.
We came to a ramshackle hotel that had seen better days than these. Outside, I noticed more young women . . . and I was the only one who noticed them. I shivered a little.
“Much further, Miss?” my officer asked.
“Not too far, I think.”
Mabel beckoned, and we went through the door and the dark lobby and down the hall. Outside the door, I saw three more ghosts . . . ghosts that looked terribly familiar.
“Officer! There’s a man named Dooley in there. He’s a notorious ladies’ man, and I think he has abducted my friend!”
“Dooley? My god!” Without another word, the policeman broke down the door with a shoulder like a battering ram, and we stumbled upon a lurid scene. The man from the drugstore had finished tying up a sack about the size and shape of a young woman, and was picking it up. Mabel seemed to be sucked into the sack with a look of horror on her face. That was a good sign, in my book.

And the officer decked the villain! (Image from Wikimedia Commons)

The officer had no hesitation. He decked the villain and then helped me open the sack. Inside, I saw it was, indeed, Mabel, only with a horrible wound on her head. She stirred slightly. “Oh, thank god,” I said. “She’s still alive.”
We looked at the doorway, and saw a gathering of curious tenants, a few of whom fled as soon as they saw an officer of the law in the room. But a stout old woman offered to fetch the doctor for Mabel, and I gave her son a quarter to go to the precinct office to get more help.
“We’ve had our eye on Dooley for some time, Miss. If you’d hesitated even another hour, I think he would have gotten away with another murder. You’ve saved your friend.”
The moon was still shining brightly on the snow when I made my way back to Sarah Kelso’s boarding house. I was chilled to the bone, but pleased with my work that night. I already felt as though New York was my home, my castle to protect. Christmas Day would be my brand new start.