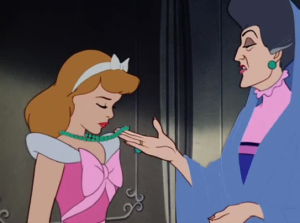 Trouble is coming. Or is it conflict?
Image (c) 1950 Disney Animation Studios.

I’ve spent a lot of time in the last week reading through the second half of Three Proposals (and highlighting á la Margie Lawson’s EDITS). I’m amazed at how crappy it all is. I mean it! I might have done some good, award-winning work on the front end, but the back end is just that…a back end. Mind you, I finished that draft nearly two years ago (??seriously??), but good grief…apparently I hadn’t yet learned the lesson about “sittin’ and thinkin’” or “conversation for conversation’s sake.”

I certainly didn’t know about conflict. Well, maybe in theory, but not in practice. There are several scenes I’ve written where I have to look HARD to find it, and in many instances, it’s not there. What is there is trouble, but that’s not the same thing.

Now, the good thing about that is it means there are plenty of scenes I can cut. And not just part of it. I mean the whole darn thing (which is fantastic, because I have to get my word count down).

The bad part is that if I really want to make my story agent-and-editor-worthy, I have some serious clean-up to do on the latter half of my book.

In the meantime, as a lesson to the rest of you (and a reminder to myself), here’s a little bit about conflict…what it is, and certainly what it is not.

Before discussing what conflict is and isn’t, it’s important to know the two ingredients required for conflict: goals and motivations. What does each character want? Why? Your characters’ pursuit of their goals will drive the conflict.

So, what is conflict?

Here’s what it isn’t:

An argument or some such discussion that could be resolved if the two characters stopped being so obtuse.

I’ve read plenty of books where two characters go in circles about some stupid and inane topic simply because one of them isn’t cutting off the other with, “Wait, stop. This is silly. Here’s the point I’m trying to make: _____. What is it that you’re saying?”

Conflict should also not be confused with trouble. Trouble is when something happens to your character that wasn’t done by your antagonist. Cinderella getting a tear in her dress is trouble. But her stepmother slashing her dress so she can’t go to the ball? That’s conflict.

Sometimes the conflict comes from two directions. For example, Susannah has conflict with both her uncle and Nate, the man investigating her uncle for treason. Both men take actions that prevent her from achieving her goal, and she must take action against both of them to achieve hers.

So what’s the problem with not having conflict in your book? Without conflict, you have no rising tension, no crisis point, no point of no return…nothing. You have two people with perfectly uninteresting lives, just going about their day with no issues, and that’s boring. Even two characters arguing through the whole book is boring. There’s no action. What makes a book so engaging and difficult to put down is each character trying to circumvent the other to get what is their heart’s desire.

To that end, conflict should be in every scene. [Note to me: take my own advice here!] If there’s no conflict, then why is the scene there? Are you writing infodump? Backstory? Things You Think The Reader Must Know? That’s not what scenes are meant to do. Each scene is a step up the mountain towards the climax, and conflict serves to escalate the tension as the characters reach the peak. It doesn’t mean that each scene has to have super-intense conflict or major, life-threatening actions (although those can be good), but there needs to be a battle, however minor, of two characters’ goals and their resulting actions, which create conflict.

I highly suggest you check out Deborah Dixon’s book GMC: Goals, Motivation, and Conflict. It’s excellent and has some great exercises for helping you identify your characters’ GMC. As you read her amazing book, I’m going to hit 3P again.

With the Delete key.