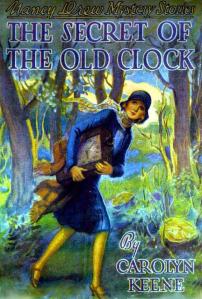 The original cover for the first Nancy Drew mystery, “The Secret of the Old Clock,” published April 28, 1930.

Over the past few weeks, our own Nancy talked about series here and here. Her posts got me to thinking about the very first series I remember reading: The Nancy Drew Mystery Stories. You’ve undoubtedly all read at least some of them and maybe you even have a few of the familiar yellow bound books around the house somewhere.

This year marks the 85th year that the books have been in print. At a time when books can often fade into oblivion as soon as they’ve been read, these stories have shown remarkable staying power. Recent statistics I saw show that 80 million of the books have been sold worldwide and they have been translated into over 40 languages. That’s quite a feat.

For many young girls Nancy Drew launched a life-time love of reading and she inspired countless others to try their hand at telling their own stories. Show of hands – who has a smudged, hand-written attempt at the bottom of a drawer or box? The Clue in the Dusty Garage anyone?

“My taste for suspense that I picked up from those books later led me to Lois Duncan’s YA thrillers and Stephen King’s horror.” ~ Allison Chopin, New York Daily News

There are a number of reasons for this success beyond “the right story at the right time,” and they can apply to other stories as well, not just this particular childhood favourite.

One thing all of the articles I read about Nancy Drew in the past few weeks agreed on was that Nancy had agency. She was determined, brilliant, fierce, plucky, independent, and full of zeal. She knew what she wanted and did whatever she needed to do to get past the obstacles in her path and solve those mysteries. Her boyfriend Ned Nickerson played the sidekick in many of the stories, and friends Bess and George helped out, but Nancy was the hero. She gave readers something to dream about and aspire to, and she did it on her own terms. She was a strong character upon which a universe was created. Any series, whether it’s about a teenaged sleuth, an aristocratic family, or a group of college friends can benefit from a strong main character with agency.

“The concept of a strong girl hero is no longer unusual. Nancy Drew is the reason.” ~ Theodore Jefferson

I first read the stories in their initial 1930s/1940s versions, like the one pictured above. Nancy wore stockings and heels, modest clothing and a lovely cloche hat, and solved her mysteries despite the constraints of the 1930s/40s. Over the years, the some of the initial stories were revised to keep them relevant and new stories reflected the time in which they were written. Nancy’s roadster gave way to a convertible, and these days I hear she drives a hybrid. She has a cell phone, so she no longer needs to rely on a switchboard operator to help her place a call, and she can do her sleuthing via computer rather than sneaking through those spooky mansions. After decades in print, Nancy Drew has remained relevant because she and her stories have transformed, right along with society.

“Not bad for someone who, despite commemorating her 85th year this past week, has never turned 19.” ~ Hayley Tsukayama, The Switch

Romance novels are no strangers to the concept of relevance either. I’ve read several authors who have taken some of their early releases and rewritten / refreshed them to make them appealing to modern readers. The ability to adapt/change in order to remain relevant with readers is key for long-term success.

Nancy Drew has not only evolved with the times and with technology, she has also expanded into other areas besides traditional physical books. At various times, Nancy starred on both the small screen and the big screen. She also went digital and can be found in a series of interactive video games that have sold more than 9 million copies since their debut in 1998.

While you might not have plans to turn a series into a video game, the possibility of expanding your writing beyond the covers of a book (physical or eBook) is a valid consideration. Several of the authors I follow via Facebook or their own websites, provide added content to readers, beyond the basic books, whether it be extra chapters, video clips, games, or other fun extras like behind-the scenes information. You can cruise with a writer (Susan Elizabeth Phillips – “Seppies At Sea”) or hone your writing craft in Italy with a writer (Eloisa James via Minerva Education).   Expansion is a way to connect with new readers as well as to keep existing readers engaged. Keeping existing readers engaged can be crucial since not all of us are on the Nora Roberts 45-days-to-write-a-book schedule.

I can definitely credit the Nancy Drew stories with instilling both a love of reading and a love of mysteries. Even my current WIP – aka The Secret of the False Accusations – reflects that.

So, what childhood favourites set you down the reading and/or writing path?