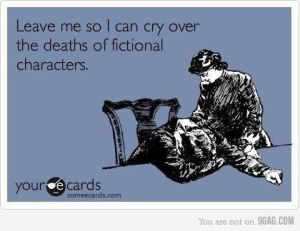 I don’t watch much television these days other than binge watching Miss Fisher’s Murder Mysteries (don’t judge), but last week, out of curiosity, I decided to tune in to a show that I used to watch just to see how things were going.

Bad-timing on my part as they were just about to kill off a major character. Fortunately, I had only watched 10 minutes of the episode before the internet erupted with spoilers – usually annoying, but in this case, much appreciated – allowing me to cut my losses and get some writing done instead.

As is often the case, the actor apparently wanted to leave the show, which meant something terrible had to happen. Now, to be fair, this particular show hasn’t killed off every actor who has chosen to leave, but there is quite a trail of dead bodies. I can think of at least three characters who survived their own departure, but the rest were about as lucky as red-uniformed officers on Star Trek.*

“It seems vindictive, when the writers could as easily have the person take a job in Tahiti. It is a way of saying “screw you” to the actor, and inadvertently screwing the fans.” ~ Random Guy on Facebook

Comments on the internet about this particular show were a mixed bag but heavily weighted on the “I can’t believe that happened” end of the spectrum. There were a number of stalwart supporters, but they were far out-weighed by the “I’ll never watch this show again” crowd. If nothing else, the episode created a lot of noise about the show, though who knows if that will have any permanent impact on viewership.

“. . . I’ll bet all these people who are saying they won’t watch again will tune in next week to see what happens. . .” ~ Susan Elizabeth Phillp’s FB post

In the day-time shows that populated network television when I was a kid back in the dark-ages, episodes would occasionally start with a voice-over stating that “the role of Bob will now be played by John Smith” before continuing on their merry way. That’s not to say characters didn’t die, have accidents, disappear, get divorced, have amnesia, find long-lost children, and experience any number of other events, but the shows seemed to be more about the characters than the actors who played them.

Killing off a character in a book is slightly different from killing a character in a show. While the decision can upset readers, especially if it relates to a well-liked character, it is driven by the writer and the story, not by external factors like a departing actor or the dreaded “season-ending cliff-hanger.”

Typically the only characters that wind up dead in the books I read are bad guys or, in the case of cozy mysteries, the requisite story-starting-murder-victim(s). Off the top of my head, the only main character I can remember being killed off recently is one of the leads in Patricia Gaffney’s Saving Graces, who dies from a terminal illness (I’m ignoring Heyer’s An Infamous Army – dead characters are expected in a war story). 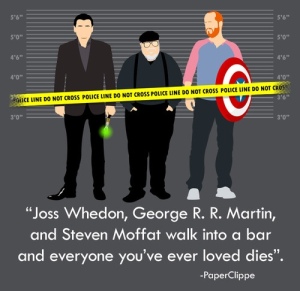 Happily-ever-after romances are not particularly known for a high body count. It’s a different story in other genres however, and there are writers with a reputation for killing off characters who are able to retain a strong and loyal readership / viewership. In the end, it’s all about why a character is being killed off. If it’s in service to the story and doesn’t come across as a plot-device or worse yet a case of “I couldn’t decide what to do with this character so I killed him off,” then the death of a character, even a well-liked one is likely to be accepted. But kill off a character without a good reason or, heaven forbid, kill off a pet, and it may just sound a death-knell for your readers.

So, what’s your take on the subject? Have you read a story where a lead or favourite character was killed off? Did it lose you as a reader or did you stick with it?