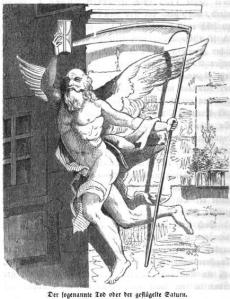 And from now on, his fans will have deathbed visions of Sir Pterry coming to guide them to the eternal. In Memoriam.

Yesterday morning, I first saw the news of Terry Pratchett’s death on a SFF discussion group. A quick google, and the BBC confirmed that it was true. They said Terry Pratchett died in his bed on March 12, 2015, surrounded by his family with his cat sleeping on his bed.

I wonder if the cat looked up to see Death coming?

Fans know that Terry was diagnosed with early-onset Alzheimer’s Disease, and he was an advocate for death with dignity. It seems that Death had other plans for him. The last tweets on his twitter account are a charming callback to one of his most famous characters. (See the BBC link above.)

He’ll be remembered for Discworld, the fantastic set of stories that poked gentle fun at our real world. His first Discworld books were very much like Douglas Adams’ Hitchhiker series in tone and humor, and I remember finding them in a bookstore in Sapporo. At the time, I lived four hours away, so I picked up The Colour of Magic (yes, it was a British edition) to read on the train, repelled and attracted by the crazy covers by Josh Kirby. I laughed out loud, and I’m sure my fellow passengers thought I was nuts as I tried to smother my sniggers. Every trip to Sapporo after that, I’d treat myself to another Pratchett until Amazon finally started shipping to Japan.

I was happy to have a new source of humor, since I’d read all of the Hitchhiker books. Then the books started to deepen and broaden. I remember enjoying the broad satire of the entertainment business in Moving Pictures and Soul Music. The anthropomorphization of Death was charming in Mort – and kept getting deeper. Then I read Small Gods, and its meditations on the nature of truth and history and time and gods just blew me away and changed my world.

Another grand reading experience was the winter I read Hogfather and two or three nonfiction works about the pagan rituals around the winter solstice. I felt as if Pratchett MUST have read these very books in preparing for his novel. For a few weeks, I felt in tune with a sort of universal mind, a sort of book mind that all of us can share, a conversation of ideas between books.

Terry Pratchett’s books have been a part of my life for 20 years. I am saddened by his death, but of all the alternatives possible, he’s had a good death after a great life. I’m sad that there won’t be more. But, oh, that such a man lived, and wrote, and shaped the world of literature! The mind may wander far too soon, the body may dissolve into dust, but his words will live as long as he has readers. Let us remember a good writer, and a good man.

(After note: I couldn’t even – still can’t – watch Robin Williams after his death last year. His art was about LIFE, and being present. So much about Terry Pratchett’s art was about the eternal and facing death with a smile. I can still hear his literary voice, “It’s a funny old world, isn’t it?”

I turned to his books instinctively, and picked up Small Gods. And right there, on page four, was the first death joke. “Time is a drug. Too much kills you.” I knew I’d made the right choice. If you are a Pratchett fan, are you reading anything in memoriam?) 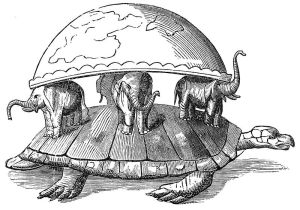 5 thoughts on “Michaeline: Death has lost his kindest chronicler”