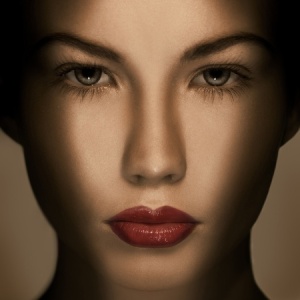 Do your characters judge others by reading their eyes? Do you make the most of this important behavior? And do you get the details right?

This week, I’ve been taking a cold, hard look at the way I write about eyes. Not so much eye color or appearance – I’m not talking twin pools of emerald, though obviously the reader needs a degree of physical description to help them build mind pictures – but eyes as the key to a character’s thoughts, emotions and responses.

It’s hardly new news that eyes are important. They’re the primary means by which humans receive information, and according to body language expert Joe Navarro: “The eyes can be very accurate barometers of our feelings because, to some degree, we have very little control over them.” The eyes are a very honest part of our face, which is why poker players, secret service agents and rock stars cover them with dark glasses.

It’s instinctive for us to read and judge other people based on their eyes. You might remember this fascinating post by Kay, reporting on neuroscientific research that suggests we look at potential partners differently depending on whether we have long-term love or insta-lust on our minds. If we’re thinking short term, we focus on the body, but if we have Happy Ever After on the brain, we look at the eyes. Whoever first said they’re the window to the soul (Shakespeare, da Vinci, it’s not clear) nailed it.

I’m writing in close third person, deep inside the head of my hero and heroine, Ian and Rose. They’re from different social circles and don’t have a shared back-story, so it’s natural for them to try to figure each other out. There’s a lot of look, stare, gaze, watch, blink and squint going on. I’ve been using my instinct and imagination, but it occurred to me that I ought to check to make sure my characters’ physical cues ring true. Assuming I get them right, the tell-tale signs should be so natural to a reader that they’re almost invisible. If I mess up, my characters are going to read wrong.

Ex-FBI Agent Joe Navarro’s best-selling book What Every Body Is Saying devotes sixteen pages to involuntary eye behavior. Mostly it’s given me added insight into behaviors I’ve already written, but it’s also made me check a couple of points and offered me the opportunity to add variety or emotional depth to my WIP. Here are a few examples:

When we look directly into another person’s eyes and hold their gaze, we’re sending a strong signal that could mean we like them, or we’re curious about them, or we want to threaten them. Humans use the same behavior to communicate love, interest, or hatred, and we depend on secondary facial cues – a relaxed smile, say, or pinched lips – to interpret the signal. I was slightly concerned about the amount of gazing and staring that Ian and Rose do, but having read what Mr. Navarro has to say, I think it makes sense. In the beginning they don’t understand each other at all, and they’re looking for clues. Later, of course, it’s all about emotional involvement. I think I’ve got the secondary signals covered. I know for sure that scary Sasha’s hard stare is accompanied by a thin-lipped, straight mouth.

When we look away from another person, it does not mean we’re being rude or rejecting them. It usually means we want to think, and we can do that better without the distraction of looking at the other person. If we look into the distance, chances are we’re comfortable with the other person and satisfied they aren’t a threat to us. If we look downwards, we might be feeling submissive or acknowledging that the other person is of a higher status (a recurring theme in werewolf stories). Rose and Ian spend quite a few scenes negotiating and re-negotiating the terms of their co-operation. I’m planning to go back over those to make sure Rose doesn’t look down while she’s thinking. She’s physically small, socially and economically inferior, but temperamentally she feels and behaves like a dominant individual. I have to be sure I back that up.

When we really like what we see, our pupils dilate, our eyebrows raise, opening up the eye area, and some people open their eyes as big and wide as possible, expanding the aperture of their eyes. Sometimes it comes and goes very quickly during a positive emotional event. I wrote Ian noticing Rose looking at him with big eyes in two or three scenes without really understanding why. I’m definitely keeping those cues.

Our blink rate is normal when we are relaxed, and it increases if we are aroused, worried, nervous or concerned. We might blink or flutter our eyelids if somebody says something we don’t like, or if we’re struggling with something. I need to make better use of this.

When we see something we don’t like, or process unwelcome information, we protect our eyes. It could be by constricting our pupils, blinking hard, squinting, closing or screwing up our eyes, or blocking them with our hands. According to Mr. Navarro “all blocking behaviors are indicative of concern, dislike, disagreement, or the perception of a potential threat.” We block automatically, as soon as something negative is heard, so when writing dialogue this would be one of the best possible indicators that something was not being well received. I have one key scene where a major family row is imminent. Rose is oblivious, but Ian knows, and he sinks his head into his hands briefly. I’m definitely keeping that.

I’d never specifically thought about it before, but I spent some time last night trying to identify authors who use eyes effectively to convey character or emotion. My favorite is Patricia Briggs. Her werewolves change eye color when they shift from human to wolf, and the change is involuntary when they’re in the grip of strong emotion, which makes fantastic shorthand. Whenever Adam the Alpha werewolf reaches for his dark glasses, my heart beats a little faster.

What do you think? Do your characters make the most of this important behavior? And do you notice when other authors use eye responses well, or does it feel so right that it adds credibility to their characters in an almost-invisible way?

12 thoughts on “Jilly: Here’s Looking At You”