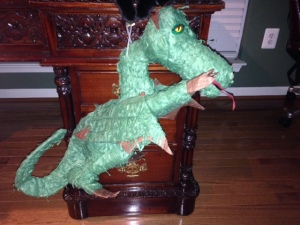 Darko the Dragon followed me home from the Dragon Ball and has taken up residence in my office.

I, like many readers, am always interested in hearing how authors of my favorite stories came up with the ideas. And I rarely have a conversation with a fellow writer about our WIPs or upcoming projects without at least touching on how/when/where we got our inspiration. I have many friends who carry notebooks or tape recorders with almost everywhere so they never miss an errant seed of an idea that might someday grow into a full-fledged story.

When I’m away from my computer, I use the Evernote program, which I usually access from my smart phone, to capture thoughts until I’ve collected enough information to download into a full-fledged story folder. But even when I’m not taking notes, when I’m supposed to be focused on something totally removed from writing, that part of my brain that always wants to be telling a story collects and stores bits of information that might later show up as puzzle pieces of one or another of my plots.

This happened to me a few months ago when my husband and I attended a ball. There I was in my evening gown with nowhere to stash my note-taking phone, let alone a notebook and pen, watching the pomp and circumstance of this very tradition-laden ball, and all I could think was, “Ohmygod, that’s what I need in that mystery story I’m going to write – a dragon!”

Okay, I should probably back up a little bit here. I love to read (and sometimes write!) fantasy as much as the next girl, but my mystery story is going to be set completely in the mundane world. So when I was thinking dragon, I didn’t mean the kind with scales and the ability to breath fire. I was attending an event called the Dragon Ball. Before your mind runs rampant with images of people running around dressed in Game of Thrones costumes, I should further clarify that this was the annual ball given by the Dragon Soldiers, which refers to soldiers from the Chemical Corp of the US Army.

Around the time we attended the ball, I had gotten to the discovery phase with my half-Danish/half-American protagonist (Nicholai Jens Olafsen, whom the Danes call Nicholai Jens and the Americans call Nicky O but who prefers to go by Nick). I needed to hammer out details of the mystery plot, which was pretty damn nebulous for a story that is supposed to be, you know, a mystery. I did know that Nick’s late Danish father was a famous astrophysicist, and his American mother is a prominent chemist…and there are  Chemical Corp soldiers known as dragons, and a family friend with secret past, and Nick in the wrong place at the wrong time…and my once-nebulous mystery suddenly turned into a workable plot!

I’m a consummate plotter and an even more consummate replotter, so the mystery as I envision it today is likely to change significantly between now and the time I finally write the damn thing. (The romantic subplot, which I worked out months ago, is much more likely to stay true, but what can I say? – no matter what genre I explore, I’m always a romance writer at heart :-)). But somehow, somewhere in that book, there will be dragons!

What’s the most fun idea your creative mind has explored lately? Any chance it will make it into one of your stories?

4 thoughts on “Nancy: An’ Thar Be Dragons”