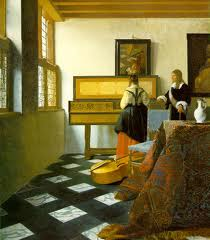 “The Music Lesson” by Johannes Vermeer

Tim’s Vermeer is a documentary film about an inventor, Tim Jenison, who had an idea that Johannes Vermeer (1632–1675, “The Music Lesson,” “Girl with a Pearl Earring”) must have used an optical device of some type to paint his pictures. Jenison developed this theory because Vermeer, unlike most of the other Dutch painters of the period, did not keep records of his work. He did not document his apprenticeship, how he mixed paint, or anything else. He did not develop sketches for his paintings. He did no underdrawings on the canvas.

How, Jenison wondered, could Vermeer do it? How did he paint those finely detailed and proportioned pictures? How could Vermeer tackle the quality of the light?

Jenison was spurred by an idea that the British painter David Hockney suggests in his 2001 book, Secret Knowledge: Rediscovering the Lost Techniques of the Old Masters. Hockney’s thesis is that optical aids such as the camera obscura, camera lucida, and curved mirrors boosted the advances in realism in Western art after the Renaissance—that the level of accuracy represented in the work of the Old Masters is impossible to create by “eyeballing it.”

Jenison sets out to demonstrate that Vermeer could have used an optical device to help his painting. He went to The Netherlands. He studied the old Dutch masters. He visited Delft, where Vermeer lived and worked. He studied the architecture. He learned Dutch. He learned how to mix paints the way they did it in 1650. He learned how to build the furniture that people used in mid-seventeenth century Holland. He learned how to make glass and he ground his own lenses for the camera obscura. He commissioned a pot that exactly matched a pot in the Vermeer painting “The Music Lesson.” He met David Hockney. He met Philip Steadman, who had written a book called Vermeer’s Camera. In that work, Steadman argues that a close study of the paintings demonstrates that Vermeer did use the camera obscura and achieved some photographic effects with it.

Jenison set to work. He built a studio with a north light, as Vermeer had. He built a room exactly like that pictured in Vermeer’s “The Music Lesson.” He built the furniture for it—both the harpsichord and the blue chair. He searched for rugs that matched. He acquired a viola da gamba. He built the windows. Everything matched exactly, to the inch.

He experimented with the idea of the camera obscura. First he built a black box. Then he found that a mirror worked better. Then he discovered that a reflecting mirror worked better still. Using this setup, he could reflect the image of the room on the canvas, one small area at a time. He then mixed paint and painted under the mirror. When the color on the canvas exactly matched the color in the mirror, he knew he was on the right track. The image emerged. In the most delicate areas, he couldn’t paint for more than 15 or 20 minutes at a time before the closeness of the work caused his back and hands to cramp. But dot by dot, painstaking line by painstaking line, he painted an exact replica of Vermeer’s “The Music Lesson.” And remember—this was done by a man who’d never painted a picture of anything in his life.

He showed his painting to Hockney and Steadman. They agreed: the result was remarkable. Did it prove anything? No. But it showed that Jensen’s technique would have enabled Vermeer to achieve the level of detail in his paintings that he did.

How long did Jenison need to get from idea to execution? 1,825 days. Five years.

Oh, good, I can hear you thinking, now I don’t have to see the movie. The reason I was so taken with this story is that Jenison—okay, so he was probably more than a little obsessed, but he was likeably obsessed—had an idea, and he explored every avenue until he accomplished what he set out to do. He faced failure and tried again. He got bored and kept going. He had accidents and started over. At one point, after he’s been painting dots for about a month, he looks into the camera and says that if they weren’t making a movie, he’d quit. He even held a public rant when he couldn’t see the original “Music Lesson,” which hangs in Buckingham Palace.

But sometimes he had a stroke of luck. A brilliant idea. An experiment panned out. And the Queen relented and let him have a private, 30-minute viewing of the painting.

And he doesn’t quit. He keeps working, and at the end, he has a really good replica of this painting. He demonstrated a technique that Vermeer could have used and showed how it could have been done.

So what did I take away from this, besides awe at Jenison’s perseverance? This: Do the research. Work hard, and work every day. I’m going to bear down on my WIP, and I’m going to finish it. And I’m going to do it in less than five years.

And when I finish, it’s going to be good.