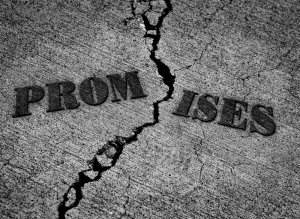 In our McDaniel classes, we spent one of the modules comparing the beginnings of our books to the endings. We looked for ways that our final scenes echoed the first ones with elements such as location, characters, and repeated motifs. And we looked at the differences that showed how the characters had changed over the course of the book to make sure the character arc of the protagonist was complete. I wrote about this idea of beginnings and endings and coming full circle in this post last fall.
Another thing we considered during this exercise was whether, by those final scenes, our stories had fulfilled the promises we’d made to the readers with our story openings. It was this aspect of analysis that haunted me this past week when I got back to my WIP. Only the problem of beginnings and endings and keeping promises isn’t with my McDaniel women’s fiction WIP. It’s with the urban fantasy manuscript I had completed and revised and then had to shelve (for sanity’s sake) a few months before signing up for the McD certificate program. And suddenly, like a lightning bolt, it hit me this past week – the problem with that WIP that I could never quite solve is the promise I made in the first chapter, or more precisely, the fact that I didn’t keep it.
Oddly enough, I’d started that book with the last scene firmly planted in my mind. All the way through that story, I had my sights set on that ending. But when I finally finished the story, while the ending was right, it wasn’t satisfactory. So I changed the ending. I worked back through the scenes I needed to change to make the new ending make sense. The new ending was satisfying, but on some level it was no longer right. So, story, meet shelf.
Then I had the epiphany this past week, and I know that I’ll need to go back to that story, reread the first chapter and act, and document the promises I’m making to the readers. After that, I’ll have to figure out an ending that keeps those promises about what kind of story it will be, which elements will end happily, and which won’t. And then I will need to go back to the revision drawing board, because even when we as readers don’t realize it, every book begins with the writer’s promise to us, and to have an ending that is both satisfactory and right, those promises must be kept.
Have you ever come to the conclusion that somewhere along the way, you broke the promises you set forth in one of your stories? What promises have you made to your readers in your current WIP?